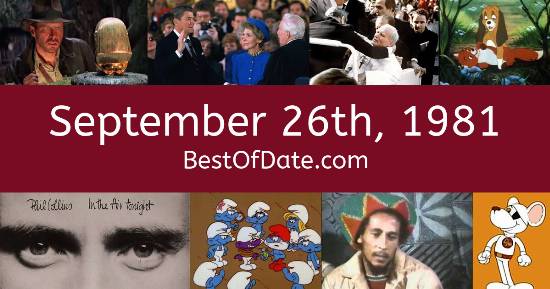 On September 26th, 1981, the following songs were at the top of the music charts in the USA and the UK.

The top "Box Office" movie on this date was the film "Continental Divide".

The date is September 26th, 1981, and it's a Saturday. Anyone born today will have the star sign Libra. Currently, people are enjoying their weekend.

Schools and colleges are starting again and Autumn has officially arrived. As a result, temperatures are beginning to cool and trees are starting to shed their leaves. The earthy smells of fall have started to fill the air. In America, the song Endless Love by Diana Ross & Lionel Richie is on top of the singles charts.

Over in the UK, Prince Charming by Adam & Ants is the number one hit song. Ronald Reagan is currently the President of the United States, and the movie Continental Divide is at the top of the Box Office. In the United Kingdom, Margaret Thatcher is the current Prime Minister.

In fashion, women are currently wearing jelly shoes, turtleneck sweaters, loose high-waist pants, crop tops and puffer jackets lined with fur. Meanwhile, men have been ditching the disco look of the 70s in favor of athletic clothing such as tracksuits and sports jerseys. The "preppy" look has also been making a comeback. Because it's 1981, the radio stations are being dominated by artists such as Kim Carnes, Soft Cell, Phil Collins, John Lennon, Stars On 45, Diana Ross and Olivia Newton-John. If you were to travel back to this day, notable figures such as Bill Shankly, William Holden, Natalie Wood and John Belushi would all be still alive.

On TV, people are watching popular shows such as "Last of the Summer Wine", "Three's Company", "The Love Boat" and "Spider-Man and His Amazing Friends". Meanwhile, gamers are playing titles such as "Lunar Lander", "Galaxian", "Pac-Man" and "Donkey Kong". Kids and teenagers are watching TV shows such as "The Bugs Bunny Show", "The All New Popeye Hour", "Cockleshell Bay" and "The Smurfs".

If you're a kid or a teenager, then you're probably playing with toys such as Lite-Brite, Magna Doodle, Hungry Hungry Hippos and Screwball Scramble.

These are trending news stories and fads that were prevalent at this time. These are topics that would have been in the media on September 26th, 1981.

Check out our personality summary for people who were born on September 26th, 1981.

If you are looking for some childhood nostalgia, then you should check out September 26th, 1987 instead.

Celebrities, historical figures and other notable people who were born on September 26th.

Author. Deceased
Born on September 26th, 1888
He was not alive on this date.

Ronald Reagan was the President of the United States on September 26th, 1981.

Enter your date of birth below to find out how old you were on September 26th, 1981.
This information is not transmitted to our server.

Here are some fun statistics about September 26th, 1981.