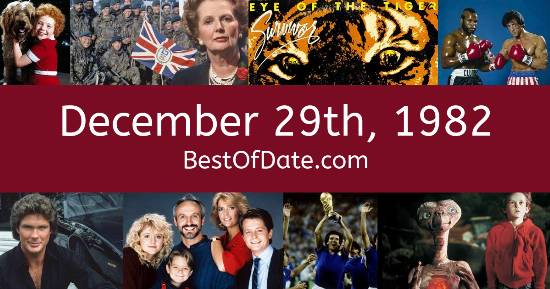 Songs that were on top of the music singles charts in the USA and the United Kingdom on December 29th, 1982.

The date is December 29th, 1982 and it's a Wednesday. Anyone born today will have the star sign Capricorn. Christmas Day of 1982 has just passed and many people are relaxing at home and enjoying the holiday season.

If you were to travel back to this day, notable figures such as Karen Carpenter and Jobriath would be still alive. On TV, people are watching popular shows such as "Happy Days", "The Love Boat", "Only Fools and Horses" and "Knight Rider". Meanwhile, gamers are playing titles such as "Lunar Lander", "Asteroids", "Missile Command" and "Donkey Kong".

Children and teenagers are currently watching television shows such as "Captain Kangaroo", "The All New Popeye Hour", "The Smurfs" and "Inspector Gadget". Popular toys at the moment include the likes of the Atari 2600, Simon (memory game), Snoopy Sno-Cone Machine and Big wheel (tricycle).

If you are looking for some childhood nostalgia, then check out December 29th, 1988 instead.

Ronald Reagan was the President of the United States on December 29th, 1982.

Margaret Thatcher was the Prime Minister of the United Kingdom on December 29th, 1982.

Enter your date of birth below to find out how old you were on December 29th, 1982.

Here are some fun statistics about December 29th, 1982.