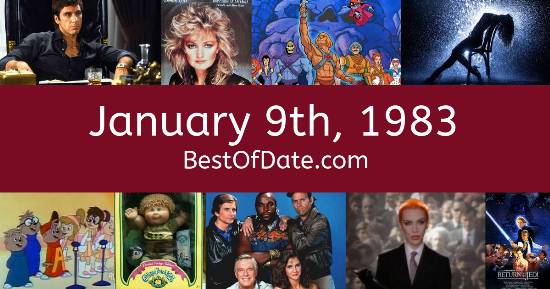 Songs that were on top of the music singles charts in the USA and the United Kingdom on January 9th, 1983:

The date is January 9th, 1983 and it's a Sunday. Anyone born today will have the star sign Capricorn. Currently, people are enjoying their weekend.

The Christmas holiday season is long over, the decorations have been taken down and a sense of normality has returned. In America, the song Maneater by Hall & Oates is on top of the singles charts. Over in the UK, Save Your Love by Renee & Renato is the number one hit song.

Because it's 1983, the radio stations are being dominated by artists such as Culture Club, Michael Jackson, Irene Cara, David Bowie and The Police. Pop star Michael Jackson has just releases his new song "Billie Jean". On TV, people are watching popular shows such as "Quincy, M.E.", "The Dukes of Hazzard", "Magnum, P.I." and "Cheers".

Meanwhile, gamers are playing titles such as "Space Invaders", "Lunar Lander", "Galaxian" and "Pac-Man". Children and teenagers are currently watching television shows such as "Happy Days", "Cockleshell Bay", "Danger Mouse" and "Inspector Gadget". If you're a kid or a teenager, then you're probably playing with toys such as "Lite-Brite", "Dungeons & Dragons", "Commodore 64" and "My Little Pony (figures)".

Celebrities, historical figures and noteable people who were born on the 9th of January:

Who was the Prime Minister of the United Kingdom on January 9th, 1983?

Enter your date of birth below to find out how old you were on January 9th, 1983.

Looking for some nostalgia? Here are some Youtube videos relating to January 9th, 1983. Please note that videos are automatically selected by Youtube and that results may vary! Click on the "Load Next Video" button to view the next video in the search playlist. In many cases, you'll find episodes of old TV shows, documentaries, music videos and soap dramas.

Here are some fun statistics about January 9th, 1983.