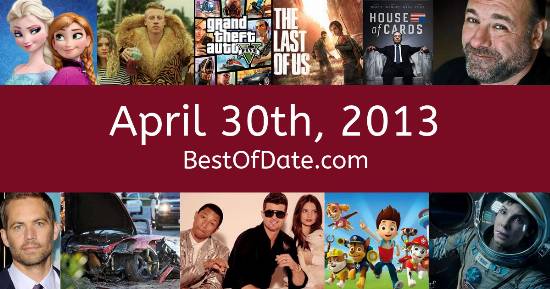 Songs that were on top of the music singles charts in the USA and the United Kingdom on April 30th, 2013:

The date is April 30th, 2013 and it's a Tuesday. Anyone born today will have the star sign Taurus. The summer of 2013 is drawing closer and temperatures have started to rise.

In the United Kingdom, David Cameron is the current Prime Minister. It's 2013, so the music charts are being dominated by artists such as Macklemore, Robin Thicke, Imagine Dragons and Bruno Mars. In soccer, Liverpool striker Luis Suarez has sparked controversy by biting Chelsea defender Branislav Ivanovic. Meanwhile, Manchester United have been crowned as Premier League champions after defeating Aston Villa 3-0 at Old Trafford.

1,134 people have tragically lost their lives following the collapse of an eight-story garment factory in Dhaka, Bangladesh. In celebrity news, former NBA star Michael Jordan and Cuban-American model Yvette Prieto have been married in Florida. Windows Live Messenger (MSN Messenger) has just been discontinued and people are reminiscing about how they used the program to chat with friends "back in the day".

People are watching popular TV shows such as "Desperate Housewives", "Prison Break", "Breaking Bad" and "The Walking Dead". Meanwhile, gamers are playing titles such as "Diablo III", "Halo 4", "DmC: Devil May Cry" and "BioShock Infinite". Children and teenagers are currently watching television shows such as "LazyTown", "Jake and the Never Land Pirates", "Doc McStuffins" and "Dog with a Blog".

Celebrities and historical figures that were born on the 30th of April:

Who was the Prime Minister of the United Kingdom on April 30th, 2013?

Enter your date of birth below to find out how old you were on April 30th, 2013.

Looking for some nostalgia? Here are some Youtube videos relating to April 30th, 2013. Please note that videos are automatically selected by Youtube and that results may vary! Click on the "Load Next Video" button to view the next video in the search playlist. In many cases, you'll find episodes of old TV shows, documentaries, music videos and soap dramas.