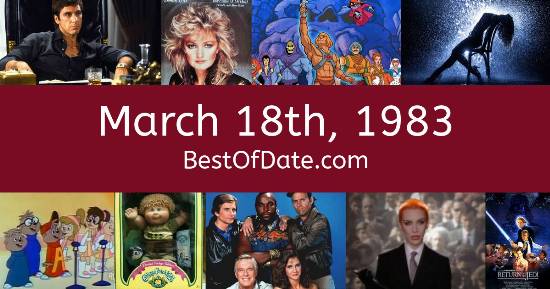 Songs that were on top of the music singles charts in the USA and the United Kingdom on March 18th, 1983.

The date is March 18th, 1983 and it's a Friday. Anyone born today will have the star sign Pisces. Currently, people have "that Friday feeling" and are looking forward to the weekend.

Spring has arrived and the days have become longer. St. Patrick's Day of 1983 has recently come and gone. In America, the song Billie Jean by Michael Jackson is on top of the singles charts.

Over in the UK, Total Eclipse Of The Heart by Bonnie Tyler is the number one hit song. Ronald Reagan is currently the President of the United States and the movie High Road to China is at the top of the Box Office. In the United Kingdom, Margaret Thatcher is the current Prime Minister.

On TV, people are watching popular shows such as "Little House on the Prairie", "Three's Company", "Chips" and "Cheers". Meanwhile, gamers are playing titles such as "Asteroids", "Galaxian", "Pac-Man" and "Donkey Kong". Children and teenagers are currently watching television shows such as "Captain Kangaroo", "The All New Popeye Hour", "Diff'rent Strokes" and "Fraggle Rock".

Popular toys at the moment include the likes of Screwball Scramble, Snoopy Sno-Cone Machine, Rubik's Cube and the Lego train set.

If you are looking for some childhood nostalgia, then check out March 18th, 1989 instead.

Ronald Reagan was the President of the United States on March 18th, 1983.

Margaret Thatcher was the Prime Minister of the United Kingdom on March 18th, 1983.

Enter your date of birth below to find out how old you were on March 18th, 1983.