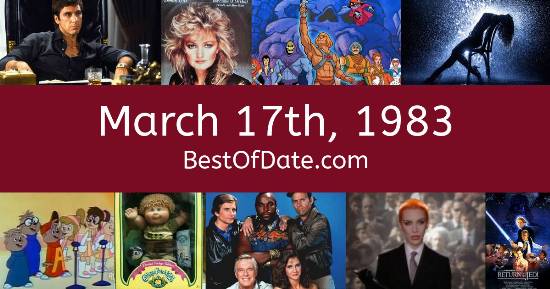 Songs that were on top of the music singles charts in the USA and the United Kingdom on March 17th, 1983.

The date is March 17th, 1983 and it's a Thursday. Anyone born today will have the star sign Pisces. Spring has arrived and the days have become longer.

It's St. Patrick's Day, which means that a sizeable amount of people are spending their day in bars. Parades are being held in major cities throughout the world. In America, the song Billie Jean by Michael Jackson is on top of the singles charts. Over in the UK, Total Eclipse Of The Heart by Bonnie Tyler is the number one hit song.

Because it's 1983, the radio stations are being dominated by artists such as Culture Club, Michael Jackson, Irene Cara, David Bowie and The Police. If you were to travel back to this day, notable figures such as Jobriath, Marvin Gaye and Truman Capote would all be still alive. On TV, people are watching popular shows such as "Little House on the Prairie", "Laverne & Shirley", "The Love Boat" and "The Facts of Life".

Meanwhile, gamers are playing titles such as "Galaxian", "Pac-Man", "Missile Command" and "Donkey Kong". Kids and teenagers are watching TV shows such as "Mister Rogers' Neighborhood", "Schoolhouse Rock!", "Dogtanian and the Three Muskehounds" and "Fraggle Rock". If you're a kid or a teenager, then you're probably playing with toys such as the Easy-Bake Oven, Intellivision (games console), Big wheel (tricycle) and Rubik's Cube.

If you are looking for some childhood nostalgia, then check out March 17th, 1989 instead.

Ronald Reagan was the President of the United States on March 17th, 1983.

Margaret Thatcher was the Prime Minister of the United Kingdom on March 17th, 1983.

Enter your date of birth below to find out how old you were on March 17th, 1983.