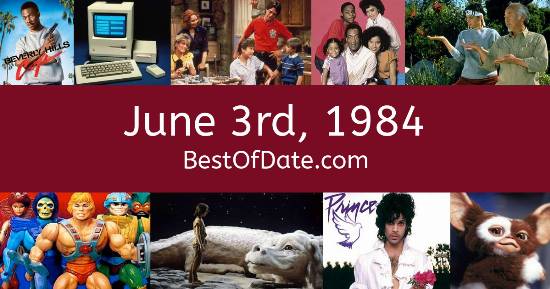 Songs that were on top of the music singles charts in the USA and the United Kingdom on June 3rd, 1984.

The date is June 3rd, 1984 and it's a Sunday. Anyone born today will have the star sign Gemini. Currently, people are enjoying their weekend.

It's summer, so the temperatures are warmer and the evenings are longer than usual. In America, the song Let's Hear It For The Boy by Deniece Williams is on top of the singles charts. Over in the UK, Wake Me Up Before You Go-go by Wham is the number one hit song.

Ronald Reagan is currently the President of the United States and the movie Star Trek III: The Search for Spock is at the top of the Box Office. In the United Kingdom, Margaret Thatcher is the current Prime Minister. Because it's 1984, the radio stations are being dominated by artists such as George Michael, Stevie Wonder, Wham!, Cyndi Lauper and Frankie Goes to Hollywood.

If you are looking for some childhood nostalgia, then check out June 3rd, 1990 instead.

Tennis player.
Born on June 3rd, 1986
He was born exactly 2 years after this date.

Actress.
Born on June 3rd, 1987
She was born exactly 3 years after this date.

German soccer player.
Born on June 3rd, 1992
He was born exactly 8 years after this date.

Ronald Reagan was the President of the United States on June 3rd, 1984.

Margaret Thatcher was the Prime Minister of the United Kingdom on June 3rd, 1984.

Enter your date of birth below to find out how old you were on June 3rd, 1984.

Here are some fun statistics about June 3rd, 1984.