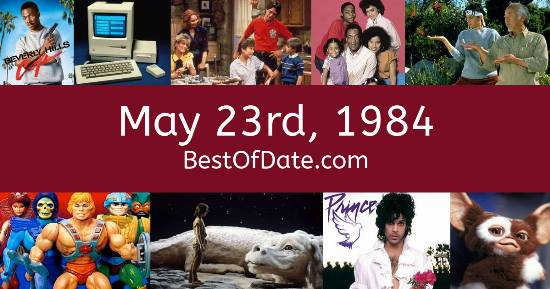 Songs that were on top of the music singles charts in the USA and the United Kingdom on May 23rd, 1984.

The date is May 23rd, 1984 and it's a Wednesday. Anyone born today will have the star sign Gemini. The summer of 1984 has finally arrived. The weather has warmed up and the evenings are brighter than usual.

In America, the song Let's Hear It For The Boy by Deniece Williams is on top of the singles charts. Over in the UK, The Reflex by Duran Duran is the number one hit song. Ronald Reagan is currently the President of the United States and the movie The Natural is at the top of the Box Office.

If you were to travel back to this day, notable figures such as Truman Capote, Kiki Camarena, David Huffman and Rock Hudson would all be still alive. On TV, people are watching popular shows such as "The Jeffersons", "The Love Boat", "Family Ties" and "Knight Rider". Meanwhile, gamers are playing titles such as "Lunar Lander", "Missile Command", "Mario Bros." and "Duck Hunt".

Children and teenagers are currently watching television shows such as "Mister Rogers' Neighborhood", "The Littles", "G.I. Joe: A Real American Hero" and "Dungeons & Dragons". If you're a kid or a teenager, then you're probably playing with toys such as the Easy-Bake Oven, Hungry Hungry Hippos, Snoopy Sno-Cone Machine and Turnin' Turbo Dashboard.

Notable events that occurred around May 23rd, 1984.

If you are looking for some childhood nostalgia, then check out May 23rd, 1990 instead.

Internet personality.
Born on May 23rd, 1999
He was born exactly 15 years after this date.

Ronald Reagan was the President of the United States on May 23rd, 1984.

Margaret Thatcher was the Prime Minister of the United Kingdom on May 23rd, 1984.