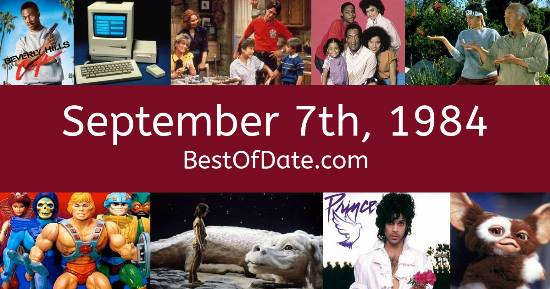 Songs that were on top of the music singles charts in the USA and the United Kingdom on September 7th, 1984.

The movie "Tightrope" was at the top of the box office on September 7th, 1984.

The date is September 7th, 1984 and it's a Friday. Anyone born today will have the star sign Virgo. Currently, people have "that Friday feeling" and are looking forward to the weekend.

Schools have started back and autumn has arrived, so temperatures have started to cool and trees are beginning to shed their leaves. In America, the song What's Love Got To Do With It by Tina Turner is on top of the singles charts. Over in the UK, I Just Called To Say I Love You by Stevie Wonder is the number one hit song.

Ronald Reagan is currently the President of the United States and the movie Tightrope is at the top of the Box Office. In the United Kingdom, Margaret Thatcher is the current Prime Minister. Because it's 1984, the radio stations are being dominated by artists such as George Michael, Stevie Wonder, Wham!, Cyndi Lauper and Frankie Goes to Hollywood.

Children and teenagers are currently watching television shows such as "Mister Rogers' Neighborhood", "Diff'rent Strokes", "Inspector Gadget" and "Dungeons & Dragons". If you're a kid or a teenager, then you're probably playing with toys such as the Easy-Bake Oven, Dungeons & Dragons, Hungry Hungry Hippos and the Commodore 64.

If you are looking for some childhood nostalgia, then check out September 7th, 1990 instead.

Ronald Reagan was the President of the United States on September 7th, 1984.

Margaret Thatcher was the Prime Minister of the United Kingdom on September 7th, 1984.

Enter your date of birth below to find out how old you were on September 7th, 1984.

Here are some fun statistics about September 7th, 1984.

Have something to say about September 7th, 1984?