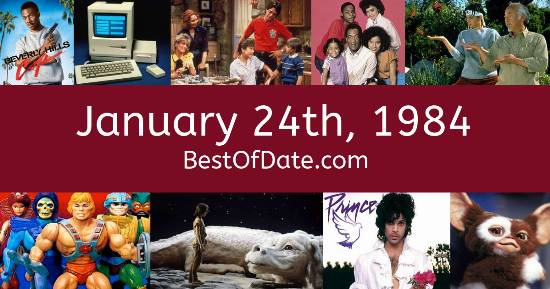 On January 24th, 1984, the following songs were at the top of the music charts in the USA and the UK.

The date is January 24th, 1984, and it's a Tuesday. Anyone born today will have the star sign Aquarius. In America, the song Owner Of A Lonely Heart by Yes is on top of the singles charts.

Over in the UK, Relax by Frankie goes to Hollywood is the number one hit song. Ronald Reagan is currently the President of the United States, and the movie Terms of Endearment is at the top of the Box Office. In the United Kingdom, Margaret Thatcher is the current Prime Minister.

On TV, people are watching popular shows such as "The Love Boat", "The Facts of Life", "Only Fools and Horses" and "Knight Rider". Meanwhile, gamers are playing titles such as "Space Invaders", "Lunar Lander", "Galaxian" and "Donkey Kong". Kids and teenagers are watching TV shows such as "The Smurfs", "G.I. Joe: A Real American Hero", "Dungeons & Dragons" and "The Charlie Brown and Snoopy Show".

Popular toys at the moment include the likes of the Easy-Bake Oven, Hungry Hungry Hippos, Masters of the Universe (figures) and Turnin' Turbo Dashboard.

These are trending news stories and fads that were prevalent at this time. These are topics that would have been in the media on January 24th, 1984.

Check out our personality summary for people who were born on January 24th, 1984.

If you are looking for some childhood nostalgia, then you should check out January 24th, 1990, instead.

Soccer player.
Born on January 24th, 1987
He was born exactly 3 years after this date.

Ronald Reagan was the President of the United States on January 24th, 1984.

Enter your date of birth below to find out how old you were on January 24th, 1984.
This information is not transmitted to our server.

Here are some fun statistics about January 24th, 1984.