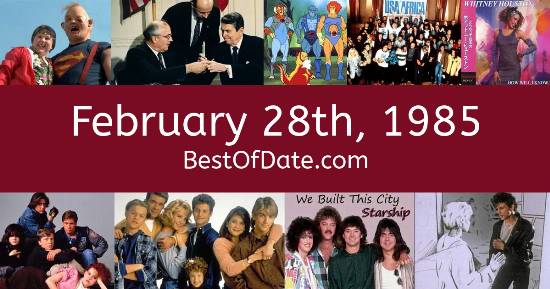 February 28th, 1985 relates to a fictional event in a movie, book, game or television series.

Songs that were on top of the music singles charts in the USA and the United Kingdom on February 28th, 1985.

The date is February 28th, 1985 and it's a Thursday. Anyone born today will have the star sign Pisces. In America, the song Careless Whisper by George Michael is on top of the singles charts.

In fashion, women are currently wearing long sweaters, fishnet stockings, fingerless gloves, jumpsuits, over-sized scarves, miniskirts, stirrup pants and spandex cycling shorts. Meanwhile, men are wearing Hawaiian shirts, flannel, shell suits and wool sport coats. Because it's 1985, the radio stations are being dominated by the likes of Tears For Fears, USA For Africa, A-ha, Foreigner, Madonna, Wham! and Phil Collins. On TV, people are watching popular shows such as "Dallas", "Only Fools and Horses", "Punky Brewster" and "Murder, She Wrote".

If you are looking for some childhood nostalgia, then check out February 28th, 1991 instead.

Celebrities, historical figures and notable people who were born on the 28th of February.

Ronald Reagan was the President of the United States on February 28th, 1985.

Margaret Thatcher was the Prime Minister of the United Kingdom on February 28th, 1985.

Enter your date of birth below to find out how old you were on February 28th, 1985.

Here are some fun statistics about February 28th, 1985.