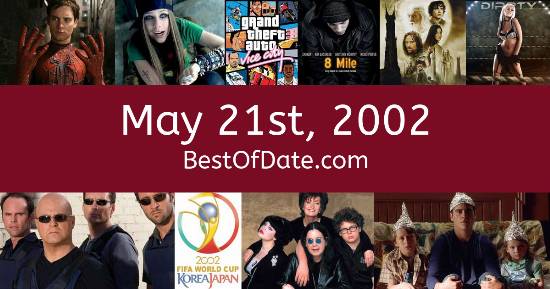 These songs were on top of the music charts in the United States and the United Kingdom on May 21st, 2002.

The top "Box Office" movie on this date was the film "Spider-Man".

The date is May 21st, 2002, and it's a Tuesday. Anyone born today will have the star sign Gemini. The summer of 2002 has finally arrived. The weather has warmed up and the evenings are brighter than usual.

In America, the song Foolish by Ashanti is on top of the singles charts. Over in the UK, Just A Little by Liberty X is the number one hit song. George W. Bush Jnr. is currently the President of the United States, and the movie Spider-Man is at the top of the Box Office.

A popular software program called LimeWire is currently being used by many people to share music, software and videos. It is also a haven for computer viruses. It's 2002, so the music charts are being dominated by the likes of Ashanti, Nickelback, Nelly, Eminem, Usher, Blu Cantrell, The Calling, Linkin Park and Jennifer Lopez. If you were to travel back to this day, notable figures such as John Gotti, Jam Master Jay, Lana Clarkson and Curt Hennig would all be still alive.

On TV, people are watching popular shows such as "7th Heaven", "Stargate SG-1", "The Office (UK version)." and "24". Meanwhile, gamers are playing titles such as "Ace Combat 04: Shattered Skies", "Return to Castle Wolfenstein", "Medal of Honor: Allied Assault" and "Kingdom Hearts". Kids and teenagers are watching TV shows such as "Little Bear", "Pokemon", "The Wild Thornberrys" and "Rocket Power".

Popular toys at the moment include the likes of Betty Spaghetty (doll), Finger skateboards, Poo-Chi (robot dog) and Razor (scooter).

These are trending news stories and fads that were prevalent at this time. These are topics that would have been in the media on May 21st, 2002.

News stories and other events that happened around May 21st, 2002.

Check out our personality summary for people who were born on May 21st, 2002.

Television shows that people were watching in May, 2002.

Popular video games that people were playing in May of 2002.

If you are looking for some childhood nostalgia, then you should check out May 21st, 2008 instead.

Serial killer. Deceased
Born on May 21st, 1960
He was not alive on this date.

Historical weather information for May 21st, 2002.

Tony Blair was the Prime Minister of the United Kingdom on May 21st, 2002.

Find out what your age was on May 21st, 2002, by entering your DOB below.
This information is not saved on our server.