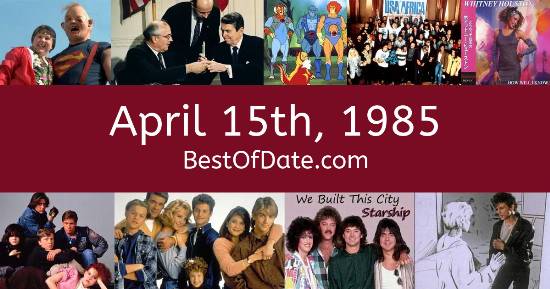 Songs that were on top of the music singles charts in the USA and the United Kingdom on April 15th, 1985.

The date is April 15th, 1985 and it's a Monday. Anyone born today will have the star sign Aries. The summer of 1985 is drawing closer and temperatures have started to rise.

The song We Are The World by USA for Africa is on top of the singles charts in both the USA and the United Kingdom. Ronald Reagan is currently the President of the United States and the movie Friday the 13th - Part V is at the top of the Box Office. In the United Kingdom, Margaret Thatcher is the current Prime Minister.

In fashion, women are currently wearing long sweaters, fishnet stockings, fingerless gloves, jumpsuits, over-sized scarves, miniskirts, stirrup pants and spandex cycling shorts. Meanwhile, men are wearing Hawaiian shirts, flannel, shell suits and wool sport coats. Because it's 1985, the radio stations are being dominated by the likes of Tears For Fears, USA For Africa, A-ha, Foreigner, Madonna, Wham! and Phil Collins. On TV, people are watching popular shows such as "The Love Boat", "Only Fools and Horses", "Family Ties" and "ThunderCats".

Meanwhile, gamers are playing titles such as "Asteroids", "Pac-Man", "Mario Bros." and "Tetris". Kids and teenagers are watching TV shows such as "The Bugs Bunny Show", "Danger Mouse", "He-Man and the Masters of the Universe" and "Thomas the Tank Engine". Popular toys at the moment include the likes of the Easy-Bake Oven, Big wheel (tricycle), Pogo ball / Lolo ball and Garbage Pail Kids (trading cards).

If you are looking for some childhood nostalgia, then check out April 15th, 1991 instead.

Ronald Reagan was the President of the United States on April 15th, 1985.

Margaret Thatcher was the Prime Minister of the United Kingdom on April 15th, 1985.

Enter your date of birth below to find out how old you were on April 15th, 1985.