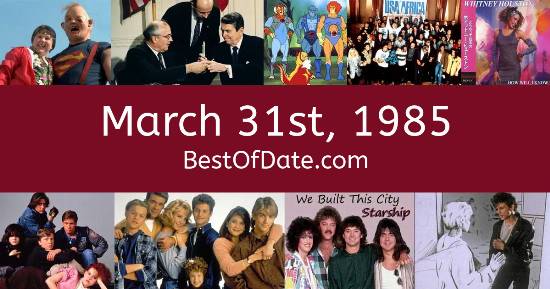 Songs that were on top of the music singles charts in the USA and the United Kingdom on March 31st, 1985.

The date is March 31st, 1985 and it's a Sunday. Anyone born today will have the star sign Aries. Currently, people are enjoying their weekend.

Spring has arrived and the days have become longer. In America, the song One More Night by Phil Collins is on top of the singles charts. Over in the UK, Easy Lover by Philip Bailey & Phil Collins is the number one hit song.

Because it's 1985, the radio stations are being dominated by the likes of Tears For Fears, USA For Africa, A-ha, Foreigner, Madonna, Wham! and Phil Collins. On TV, people are watching popular shows such as "The A-Team", "Who's the Boss?", "Miami Vice" and "Charles in Charge". Meanwhile, gamers are playing titles such as "Lunar Lander", "Asteroids", "Mario Bros." and "Star Wars: The Empire Strikes Back".

Children and teenagers are currently watching television shows such as "Dungeons & Dragons", "The Charlie Brown and Snoopy Show", "The Transformers" and "Thomas the Tank Engine". If you're a kid or a teenager, then you're probably playing with toys such as Fisher-Price Little People (Farm), Masters of the Universe (figures), the Commodore 64 and Pogo ball / Lolo ball.

If you are looking for some childhood nostalgia, then check out March 31st, 1991 instead.

Ronald Reagan was the President of the United States on March 31st, 1985.

Margaret Thatcher was the Prime Minister of the United Kingdom on March 31st, 1985.

Enter your date of birth below to find out how old you were on March 31st, 1985.