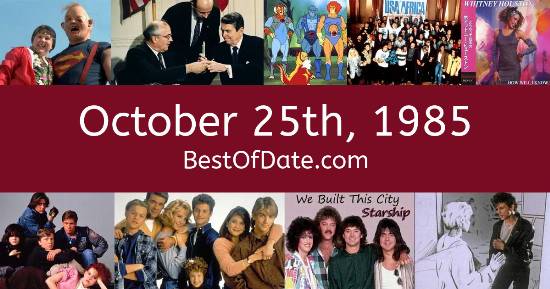 Songs that were on top of the music singles charts in the USA and the United Kingdom on October 25th, 1985.

The date is October 25th, 1985 and it's a Friday. Anyone born today will have the star sign Scorpio. Currently, people have "that Friday feeling" and are looking forward to the weekend.

The summer is long gone. Temperatures have started to become much cooler and the evenings are beginning to get darker. Fallen leaves have carpeted driveways, lawns, pathways and sidewalks and there's a fresh earthy scent in the ear. Halloween of 1985 is quickly approaching and stores are selling costumes and decorations.

In America, the song Saving All My Love For You by Whitney Houston is on top of the singles charts. Over in the UK, The Power Of Love by Jennifer Rush is the number one hit song. Ronald Reagan is currently the President of the United States and the movie Jagged Edge is at the top of the Box Office.

If you were to travel back to this day, notable figures such as Paul Castellano, Phil Lynott, Christa McAuliffe and Len Bias would all be still alive. On TV, people are watching popular shows such as "Trapper John, M.D.", "Knight Rider", "'Allo 'Allo!" and "Scarecrow and Mrs. King". Meanwhile, gamers are playing titles such as "Galaxian", "Tetris", "Boulder Dash" and "Ultima IV: Quest of the Avatar".

Kids and teenagers are watching TV shows such as "Cockleshell Bay", "G.I. Joe: A Real American Hero", "Alvin and the Chipmunks" and "The Transformers". Popular toys at the moment include the likes of Big wheel (tricycle), My Little Pony (figures), Turnin' Turbo Dashboard and Pound Puppies.

If you are looking for some childhood nostalgia, then check out October 25th, 1991 instead.

Ronald Reagan was the President of the United States on October 25th, 1985.

Margaret Thatcher was the Prime Minister of the United Kingdom on October 25th, 1985.

Enter your date of birth below to find out how old you were on October 25th, 1985.

Here are some fun statistics about October 25th, 1985.