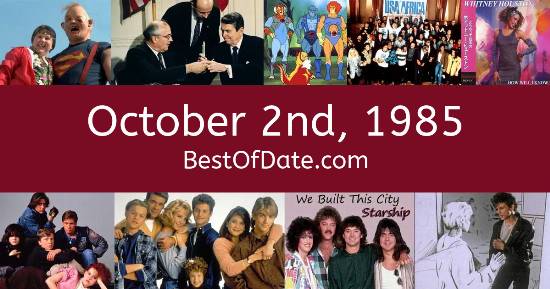 Songs that were on top of the music singles charts in the USA and the United Kingdom on October 2nd, 1985.

The date is October 2nd, 1985 and it's a Wednesday. Anyone born today will have the star sign Libra. The summer is long gone. Temperatures have started to become much cooler and the evenings are beginning to get darker.

Fallen leaves have carpeted driveways, lawns, pathways and sidewalks and there's a fresh earthy scent in the ear. In America, the song Money For Nothing by Dire Straits is on top of the singles charts. Over in the UK, If I Was by Midge Ure is the number one hit song.

Because it's 1985, the radio stations are being dominated by the likes of Tears For Fears, USA For Africa, A-ha, Foreigner, Madonna, Wham! and Phil Collins. On TV, people are watching popular shows such as "Last of the Summer Wine", "Trapper John, M.D.", "Only Fools and Horses" and "Punky Brewster". Meanwhile, gamers are playing titles such as "Space Invaders", "Missile Command", "Star Wars: The Empire Strikes Back" and "Super Mario Bros.".

Kids and teenagers are watching TV shows such as "Inspector Gadget", "Dungeons & Dragons", "ThunderCats" and "The Care Bears". If you're a kid or a teenager, then you're probably playing with toys such as the Easy-Bake Oven, Big Jim (action figure), Water Ring Toss and Fisher-Price Little People (Farm).

Celebrities, historical figures and notable people who were born on the 2nd of October.

Ronald Reagan was the President of the United States on October 2nd, 1985.

Margaret Thatcher was the Prime Minister of the United Kingdom on October 2nd, 1985.

Enter your date of birth below to find out how old you were on October 2nd, 1985.

Here are some fun statistics about October 2nd, 1985.

Leave a comment and tell everyone why October 2nd, 1985 is important to you.