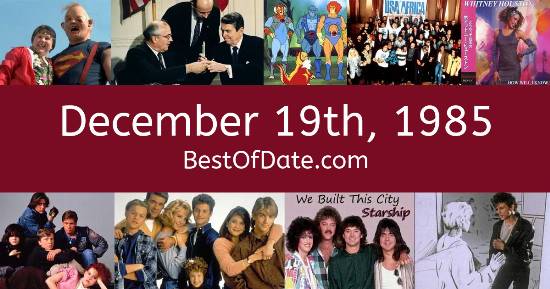 Songs that were on top of the music singles charts in the USA and the United Kingdom on December 19th, 1985.

The date is December 19th, 1985 and it's a Thursday. Anyone born today will have the star sign Sagittarius. The Christmas season of 1985 is in full swing. The decorations are up and festive songs are playing on the radio.

In America, the song Say You Say Me by Lionel Richie is on top of the singles charts. Over in the UK, Saving All My Love For You by Whitney Houston is the number one hit song. Ronald Reagan is currently the President of the United States and the movie King Solomon's Mines is at the top of the Box Office.

On TV, people are watching popular shows such as "Sherlock Holmes", "The Transformers", "Punky Brewster" and "Miami Vice". Meanwhile, gamers are playing titles such as "Space Invaders", "Duck Hunt", "Back to the Future" and "Super Mario Bros.". Kids and teenagers are watching TV shows such as "Cockleshell Bay", "The Smurfs", "Fraggle Rock" and "ThunderCats".

Popular toys at the moment include the likes of Big Jim (action figure), Cabbage Patch Kids, Snoopy Sno-Cone Machine and Masters of the Universe (figures).

A Spotify playlist of songs from the year 1985. Take a trip back to the days of Bryan Adams, a-ha, Phil Collins and Huey Lewis and the News.

Ronald Reagan was the President of the United States on December 19th, 1985.

Margaret Thatcher was the Prime Minister of the United Kingdom on December 19th, 1985.

Enter your date of birth below to find out how old you were on December 19th, 1985.

Here are some fun statistics about December 19th, 1985.

Leave a comment and tell everyone why December 19th, 1985 is important to you.