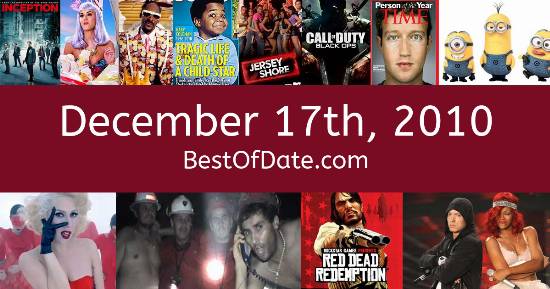 These songs were on top of the music charts in the United States and the United Kingdom on December 17th, 2010.

The movie "Tron Legacy" was at the top of the Box Office on this day.

The date is December 17th, 2010, and it's a Friday. Anyone born today will have the star sign Sagittarius. Currently, people have "that Friday feeling" and are looking forward to the weekend.

The Christmas season of 2010 is in full swing. People are putting up their decorations and festive songs are playing on the radio. In America, the song Raise Your Glass by Pink is on top of the singles charts. Over in the UK, The Time by Black Eyed Peas is the number one hit song.

Barack Obama is currently the President of the United States, and the movie Tron Legacy is at the top of the Box Office. In the United Kingdom, David Cameron is the current Prime Minister. The term "hipster" is currently growing in use. The word is being used to describe people who are pretentious and deliberately anti-mainstream.

Matt Cardle has been crowned as the winner of seventh season of The X Factor. In music news, rapper Ja Rule has been just been sentenced to two years in prison for attempted possession of a weapon. Meanwhile, wrestling star Hulk Hogan has recently tied the knot with his second wife Jennifer McDaniel.

People on the Internet are using the phrase "That Really Rustled My Jimmies" to express their annoyance at things. If you were to travel back to this day, notable figures such as Pete Postlethwaite, Nate Dogg, Elizabeth Taylor and Randy Savage would all be still alive. On TV, people are watching popular shows such as "CSI: NY", "Breaking Bad", "Real Housewives of New York City" and "Boardwalk Empire".

Meanwhile, gamers are playing titles such as "Farmville", "League of Legends", "Halo: Reach" and "Super Meat Boy". Children and teenagers are currently watching television shows such as "Peppa Pig", "Horrid Henry", "Phineas and Ferb" and "iCarly". Popular toys at the moment include the likes of the Xbox 360, the PlayStation 3, ZhuZhu Pets and the iPad.

These are trending news stories and fads that were prevalent at this time. These are topics that would have been in the media on December 17th, 2010.

News stories and other events that happened around December 17th, 2010.

Check out our personality summary for people who were born on December 17th, 2010.

If you are looking for some childhood nostalgia, then you should check out December 17th, 2016 instead.

Barack Obama was the President of the United States on December 17th, 2010.

David Cameron was the Prime Minister of the United Kingdom on December 17th, 2010.

Find out what your age was on December 17th, 2010, by entering your DOB below.
This information is not saved on our server.

Here are some fun statistics about December 17th, 2010.