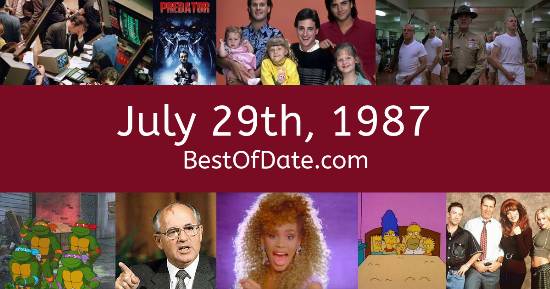 Songs that were on top of the music singles charts in the USA and the United Kingdom on July 29th, 1987.

The date is July 29th, 1987 and it's a Wednesday. Anyone born today will have the star sign Leo. It's summer, so the temperatures are warmer and the evenings are longer than usual.

In America, the song Shakedown by Bob Seger is on top of the singles charts. Over in the UK, La Bamba by Los Lobos is the number one hit song. Ronald Reagan is currently the President of the United States and the movie Robocop is at the top of the Box Office.

On TV, people are watching popular shows such as "Only Fools and Horses", "'Allo 'Allo!", "Who's the Boss?" and "Murder, She Wrote". Meanwhile, gamers are playing titles such as "Mario Bros.", "Duck Hunt", "Tetris" and "Punch-Out!!". Children and teenagers are currently watching television shows such as "Heathcliff", "The Cosby Show", "The Care Bears" and "Growing Pains".

Popular toys at the moment include the likes of Cabbage Patch Kids, My Little Pony (figures), Transformers and Pogo ball / Lolo ball.

If you are looking for some childhood nostalgia, then check out July 29th, 1993 instead.

Television personality.
Born on July 29th, 1990
He was born exactly 3 years after this date.

Ronald Reagan was the President of the United States on July 29th, 1987.

Margaret Thatcher was the Prime Minister of the United Kingdom on July 29th, 1987.