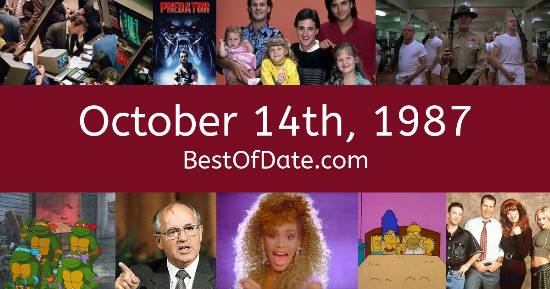 Songs that were on top of the music singles charts in the USA and the United Kingdom on October 14th, 1987.

The date is October 14th, 1987 and it's a Wednesday. Anyone born today will have the star sign Libra. The summer is long gone. Temperatures have started to become much cooler and the evenings are beginning to get darker.

Fallen leaves have carpeted driveways, lawns, pathways and sidewalks and there's a fresh earthy scent in the ear. In America, the song Lost In Emotion by Lisa Lisa & Cult Jam is on top of the singles charts. Over in the UK, You Win Again by The Bee Gees is the number one hit song.

Because it's 1987, the radio stations are being dominated by the likes of Los Lobos, Rick Astley, Whitney Houston, the Pet Shop Boys, Bon Jovi, U2 and Madonna. On TV, people are watching popular shows such as "Cagney & Lacey", "Punky Brewster", "Miami Vice" and "She-Ra: Princess of Power". Meanwhile, gamers are playing titles such as "Missile Command", "Mario Bros.", "Ultima IV: Quest of the Avatar" and "Punch-Out!!".

Kids and teenagers are watching TV shows such as "Muppet Babies", "ALF", "Adventures of the Little Koala" and "Beverly Hills Teens". If you're a kid or a teenager, then you're probably playing with toys such as the Easy-Bake Oven, My Little Pony (figures), Garbage Pail Kids (trading cards) and Fluppy Dogs.

If you are looking for some childhood nostalgia, then check out October 14th, 1993 instead.

Celebrities, historical figures and notable people who were born on the 14th of October.

Ronald Reagan was the President of the United States on October 14th, 1987.

Margaret Thatcher was the Prime Minister of the United Kingdom on October 14th, 1987.

Enter your date of birth below to find out how old you were on October 14th, 1987.

Here are some fun statistics about October 14th, 1987.