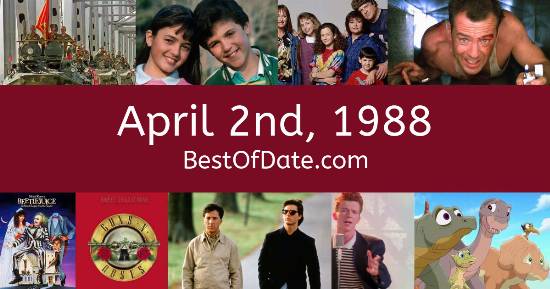 Songs that were on top of the music singles charts in the USA and the United Kingdom on April 2nd, 1988.

The date is April 2nd, 1988 and it's a Saturday. Anyone born today will have the star sign Aries. Currently, people are enjoying their weekend.

The summer of 1988 is drawing closer and temperatures have started to rise. In America, the song Man In The Mirror by Michael Jackson is on top of the singles charts. Over in the UK, Don't Turn Around by Aswad is the number one hit song.

It's 1988, so the airwaves are being dominated by music artists such as Phil Collins, Bobby McFerrin, the Pet Shop Boys, Belinda Carlisle and Rick Astley. On TV, people are watching popular shows such as "Miami Vice", "My Two Dads", "Star Trek: The Next Generation" and "Teenage Mutant Ninja Turtles". Meanwhile, gamers are playing titles such as "Missile Command", "Duck Hunt", "Tetris" and "Metal Gear".

Children and teenagers are currently watching television shows such as "The Bugs Bunny Show", "Thomas the Tank Engine", "Growing Pains" and "Pingu". If you're a kid or a teenager, then you're probably playing with toys such as Speak & Spell, Big wheel (tricycle), Pogo ball / Lolo ball and Sylvanian Families.

If you are looking for some childhood nostalgia, then check out April 2nd, 1994 instead.

Ronald Reagan was the President of the United States on April 2nd, 1988.

Margaret Thatcher was the Prime Minister of the United Kingdom on April 2nd, 1988.

Enter your date of birth below to find out how old you were on April 2nd, 1988.

Here are some fun statistics about April 2nd, 1988.