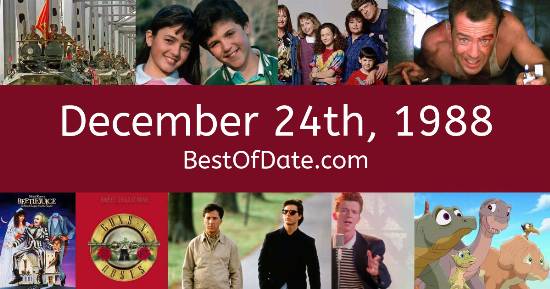 December 24th, 1988 relates to an event in a movie, book, game or television series:

Songs that were on top of the music singles charts in the USA and the United Kingdom on December 24th, 1988:

The date is December 24th, 1988 and it's a Saturday. Anyone born today will have the star sign Capricorn. Currently, people are enjoying their weekend.

It's Christmas Eve of 1988. The big day is fast approaching and the excitement is building. Department stores are thronged with people who are trying to do some last-minute shopping. In America, the song Look Away by Chicago is on top of the singles charts. Over in the UK, Mistletoe And Wine by Cliff Richard is the number one hit song.

It's 1988, so the airwaves are being dominated by music artists such as Phil Collins, Bobby McFerrin, the Pet Shop Boys, Belinda Carlisle and Rick Astley. On TV, people are watching popular shows such as "Last of the Summer Wine", "The Cosby Show", "ThunderCats" and "Teenage Mutant Ninja Turtles". Meanwhile, gamers are playing titles such as "Missile Command", "Duck Hunt", "Super Mario Bros. 3" and "Mega Man 2".

Kids and teenagers are watching TV shows such as "The Bugs Bunny Show", "Thomas the Tank Engine", "The Real Ghostbusters" and "Fireman Sam". If you're a kid or a teenager, then you're probably playing with toys such as "Easy-Bake Oven", "Garbage Pail Kids (trading cards)", "Sylvanian Families" and "Popples".

Who was the Prime Minister of the United Kingdom on December 24th, 1988?

Enter your date of birth below to find out how old you were on December 24th, 1988.

Looking for some nostalgia? Here are some Youtube videos relating to December 24th, 1988. Please note that videos are automatically selected by Youtube and that results may vary! Click on the "Load Next Video" button to view the next video in the search playlist. In many cases, you'll find episodes of old TV shows, documentaries, music videos and soap dramas.

Here are some fun statistics about December 24th, 1988.