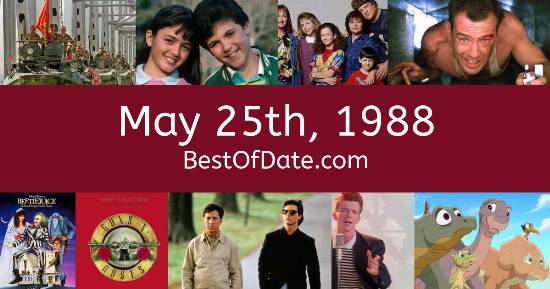 On May 25th, 1988, the following songs were at the top of the music charts in the USA and the UK.

The top "Box Office" movie on this date was the film "Willow".

The date is May 25th, 1988, and it's a Wednesday. Anyone born today will have the star sign Gemini. The summer of 1988 has finally arrived. The weather has warmed up and the evenings are brighter than usual.

In America, the song Anything For You by Gloria Estefan & Miami Sound Machine is on top of the singles charts. Over in the UK, With A Little Help From My Friends / She's Leaving Home by Wet Wet Wet / Billy Bragg is the number one hit song. Ronald Reagan is currently the President of the United States, and the movie Willow is at the top of the Box Office.

If you were to travel back to this day, notable figures such as Judith Barsi, Roy Orbison, Sugar Ray Robinson and Ruhollah Khomeini would all be still alive. On TV, people are watching popular shows such as "Last of the Summer Wine", "Night Court", "Kate & Allie" and "Sherlock Holmes". Meanwhile, gamers are playing titles such as "Missile Command", "Tetris", "Street Fighter" and "Metal Gear".

Children and teenagers are currently watching television shows such as "Alvin and the Chipmunks", "Adventures of the Gummi Bears", "DuckTales" and "Teenage Mutant Ninja Turtles". If you're a kid or a teenager, then you're probably playing with toys such as Cabbage Patch Kids, the Commodore 64, My Little Pony (figures) and Jenga.

These are trending news stories and fads that were prevalent at this time. These are topics that would have been in the media on May 25th, 1988.

News stories and other events that happened around May 25th, 1988.

Check out our personality summary for people who were born on May 25th, 1988.

If you are looking for some childhood nostalgia, then you should check out May 25th, 1994 instead.

Love Island contestant.
Born on May 25th, 1999
She was born exactly 11 years after this date.

Historical weather information for May 25th, 1988.

Ronald Reagan was the President of the United States on May 25th, 1988.

Margaret Thatcher was the Prime Minister of the United Kingdom on May 25th, 1988.

Find out what your age was on May 25th, 1988, by entering your DOB below.
This information is not saved on our server.