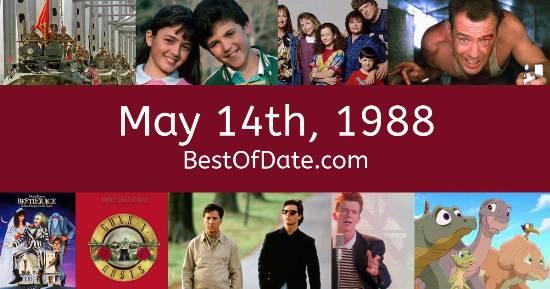 Songs that were on top of the music singles charts in the USA and the United Kingdom on May 14th, 1988.

The date is May 14th, 1988 and it's a Saturday. Anyone born today will have the star sign Taurus. Currently, people are enjoying their weekend.

The summer of 1988 has finally arrived. The weather has warmed up and the evenings are brighter than usual. In America, the song Wishing Well by Terence Trent D'Arby is on top of the singles charts. Over in the UK, Theme From S-Express by S-Express is the number one hit song.

It's 1988, so the airwaves are being dominated by music artists such as Phil Collins, Bobby McFerrin, the Pet Shop Boys, Belinda Carlisle and Rick Astley. If you were to travel back to this day, notable figures such as Judith Barsi, Roy Orbison, Sugar Ray Robinson and Ruhollah Khomeini would all be still alive. On TV, people are watching popular shows such as "Columbo", "Kate & Allie", "The Golden Girls" and "Married... with Children".

Meanwhile, gamers are playing titles such as "Tetris", "Street Fighter", "Top Gun" and "Maniac Mansion ". Children and teenagers are currently watching television shows such as "Jem and the Holograms", "The Real Ghostbusters", "BraveStarr" and "The World of David the Gnome". If you're a kid or a teenager, then you're probably playing with toys such as Screwball Scramble, Fisher-Price Little People (Farm), Pound Puppies and Micro Machines.

Notable events that occurred around May 14th, 1988.

If you are looking for some childhood nostalgia, then check out May 14th, 1994 instead.

Internet personality.
Born on May 14th, 1996
She was born exactly 8 years after this date.

Historical weather information for May 14th, 1988.

Ronald Reagan was the President of the United States on May 14th, 1988.

Margaret Thatcher was the Prime Minister of the United Kingdom on May 14th, 1988.