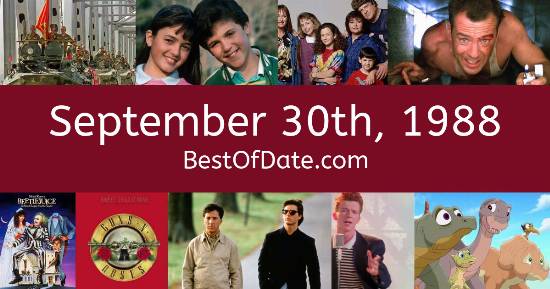 Songs that were on top of the music singles charts in the USA and the United Kingdom on September 30th, 1988.

The movie "Gorillas in the Mist" was at the top of the box office on September 30th, 1988.

The date is September 30th, 1988 and it's a Friday. Anyone born today will have the star sign Libra. Currently, people have "that Friday feeling" and are looking forward to the weekend.

Schools and colleges are starting again and Autumn has officially arrived. As a result, temperatures are beginning to cool and trees are starting to shed their leaves. The earthy smells of fall have started to fill the air. In America, the song Don't Worry Be Happy by Bobby McFerrin is on top of the singles charts.

Over in the UK, He Ain't Heavy He's My Brother by Hollies is the number one hit song. Ronald Reagan is currently the President of the United States and the movie Gorillas in the Mist is at the top of the Box Office. In the United Kingdom, Margaret Thatcher is the current Prime Minister.

On TV, people are watching popular shows such as "'Allo 'Allo!", "Who's the Boss?", "Murder, She Wrote" and "Moonlighting". Meanwhile, gamers are playing titles such as "Double Dragon", "Top Gun", "Platoon" and "Maniac Mansion ". Children and teenagers are currently watching television shows such as "Snorks", "ThunderCats", "The Care Bears" and "The Real Ghostbusters".

If you're a kid or a teenager, then you're probably playing with toys such as the Commodore 64, Pound Puppies, Sylvanian Families and Koosh Ball.

If you are looking for some childhood nostalgia, then check out September 30th, 1994 instead.

Author. Deceased
Born on September 30th, 1924
He was not alive on this date.

American dancer.
Born on September 30th, 2002
She was born exactly 14 years after this date.

Ronald Reagan was the President of the United States on September 30th, 1988.

Margaret Thatcher was the Prime Minister of the United Kingdom on September 30th, 1988.

Enter your date of birth below to find out how old you were on September 30th, 1988.

Here are some fun statistics about September 30th, 1988.