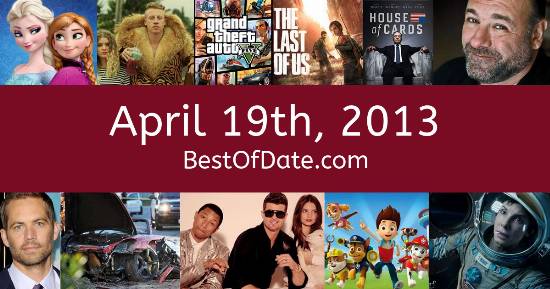 Songs that were on top of the music singles charts in the USA and the United Kingdom on April 19th, 2013:

The date is April 19th, 2013 and it's a Friday. Anyone born today will have the star sign Aries. Currently, people have "that Friday feeling" and are looking forward to the weekend.

The summer of 2013 is drawing closer and temperatures have started to rise. In America, the song When I Was Your Man by Bruno Mars is on top of the singles charts. Over in the UK, Waiting All Night by Rudimental is the number one hit song.

Barack Obama is currently the President of the United States and the movie Oblivion is at the top of the Box Office. In the United Kingdom, David Cameron is the current Prime Minister. It's 2013, so the music charts are being dominated by artists such as Macklemore, Robin Thicke, Imagine Dragons and Bruno Mars.

Pop star Justin Bieber has drawn controversy following his comments that Anne Frank would have been "a Belieber." The world is currently in shock following the terrorist bombing at the annual Boston Marathon. Three people have been left dead by the blasts and several hundred have been injured. A massive manhunt is underway for two brothers called Dzhokhar Tsarnaev and Tamerlan Tsarnaev, who are believed to have planned and carried out the bombing. Australian entertainer Rolf Harris has just been named as the "veteran entertainer" who was arrested last month by police investigating allegations of sexual abuse.

Daft Punk have just released their new single "Get Lucky", featuring Pharrell Williams. People are watching popular TV shows such as "Sons of Anarchy", "The Vampire Diaries", "Modern Family" and "House of Cards". Meanwhile, gamers are playing titles such as "Borderlands 2", "Halo 4", "DmC: Devil May Cry" and "Tomb Raider".

Kids and teenagers are watching TV shows such as "Dora the Explorer", "Peppa Pig", "LazyTown" and "Austin & Ally". If you're a kid or a teenager, then you're probably playing with toys such as "Xbox 360", "PlayStation 3" and "The Wii U".

Who was the Prime Minister of the United Kingdom on April 19th, 2013?

Enter your date of birth below to find out how old you were on April 19th, 2013.

Looking for some nostalgia? Here are some Youtube videos relating to April 19th, 2013. Please note that videos are automatically selected by Youtube and that results may vary! Click on the "Load Next Video" button to view the next video in the search playlist. In many cases, you'll find episodes of old TV shows, documentaries, music videos and soap dramas.