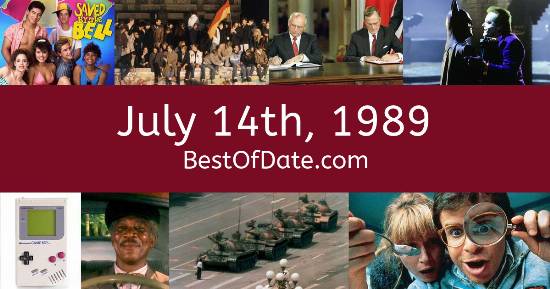 Songs that were on top of the music singles charts in the USA and the United Kingdom on July 14th, 1989.

The date is July 14th, 1989 and it's a Friday. Anyone born today will have the star sign Cancer. Currently, people have "that Friday feeling" and are looking forward to the weekend.

It's summer, so the temperatures are warmer and the evenings are longer than usual. In America, the song If You Don't Know Me By Now by Simply Red is on top of the singles charts. Over in the UK, Back To Life by Soul II Soul is the number one hit song.

It's 1989, so the airwaves are being dominated by music artists such as Madonna, The Bangles, Phil Collins, Roxette, Milli Vanilli and The B-52s. On TV, people are watching popular shows such as "Last of the Summer Wine", "Dallas", "ALF" and "The Wonder Years". Meanwhile, gamers are playing titles such as "Duck Hunt", "Maniac Mansion ", "SimCity" and "Super Mario Land".

Kids and teenagers are watching TV shows such as "Mister Rogers' Neighborhood", "The Smurfs", "Danger Mouse" and "Adventures of the Little Koala". If you're a kid or a teenager, then you're probably playing with toys such as Cabbage Patch Kids, Pound Puppies, Transformers and Popples.

Margaret Thatcher was the Prime Minister of the United Kingdom on July 14th, 1989.

Leave a comment and tell everyone why July 14th, 1989 is important to you.