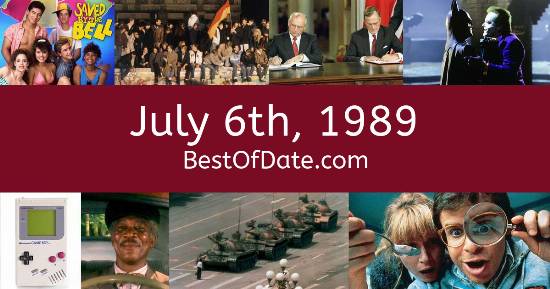 Songs that were on top of the music singles charts in the USA and the United Kingdom on July 6th, 1989.

The date is July 6th, 1989 and it's a Thursday. Anyone born today will have the star sign Cancer. The 4th of July celebrations in America have come and passed.

It's summer, so the temperatures are warmer and the evenings are longer than usual. In America, the song Good Thing by Fine Young Cannibals is on top of the singles charts. Over in the UK, Back To Life by Soul II Soul is the number one hit song.

It's 1989, so the airwaves are being dominated by music artists such as Madonna, The Bangles, Phil Collins, Roxette, Milli Vanilli and The B-52s. If you were to travel back to this day, notable figures such as Mel Blanc, Rebecca Schaeffer, Bette Davis and Sammy Davis, Jr would all be still alive. On TV, people are watching popular shows such as "'Allo 'Allo!", "The Golden Girls", "Matlock" and "The Wonder Years".

Meanwhile, gamers are playing titles such as "Duck Hunt", "Maniac Mansion ", "Altered Beast" and "Super Mario Land". Kids and teenagers are watching TV shows such as "The Cosby Show", "Fireman Sam", "Teenage Mutant Ninja Turtles" and "Roseanne". Popular toys at the moment include the likes of the Easy-Bake Oven, Transformers, Sylvanian Families and Micro Machines.

If you are looking for some childhood nostalgia, then check out July 6th, 1995 instead.

George W. Bush Snr. was the President of the United States on July 6th, 1989.

Margaret Thatcher was the Prime Minister of the United Kingdom on July 6th, 1989.

Enter your date of birth below to find out how old you were on July 6th, 1989.

Here are some fun statistics about July 6th, 1989.