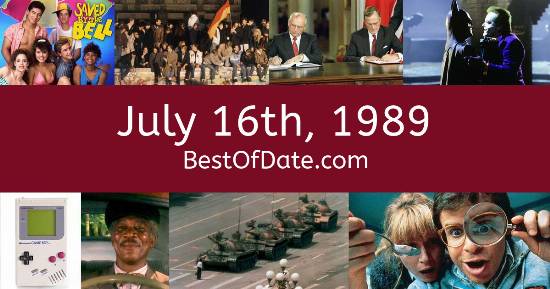 Songs that were on top of the music singles charts in the USA and the United Kingdom on July 16th, 1989.

The date is July 16th, 1989 and it's a Sunday. Anyone born today will have the star sign Cancer. Currently, people are enjoying their weekend.

It's summer, so the temperatures are warmer and the evenings are longer than usual. In America, the song If You Don't Know Me By Now by Simply Red is on top of the singles charts. Over in the UK, Back To Life by Soul II Soul is the number one hit song.

It's 1989, so the airwaves are being dominated by music artists such as Madonna, The Bangles, Phil Collins, Roxette, Milli Vanilli and The B-52s. If you were to travel back to this day, notable figures such as Rebecca Schaeffer, Bette Davis, Sammy Davis, Jr and Stevie Ray Vaughan would all be still alive. On TV, people are watching popular shows such as "Knots Landing", "The Cosby Show", "Murder, She Wrote" and "Charles in Charge".

Meanwhile, gamers are playing titles such as "Ultima IV: Quest of the Avatar", "Gain Ground", "Super Mario Bros. 3" and "Mega Man 2". Kids and teenagers are watching TV shows such as "Danger Mouse", "Count Duckula", "Denver, the Last Dinosaur" and "Noozles". Popular toys at the moment include the likes of My Little Pony (figures), Transformers, Mr Frosty and Popples.

If you are looking for some childhood nostalgia, then check out July 16th, 1995 instead.

Margaret Thatcher was the Prime Minister of the United Kingdom on July 16th, 1989.