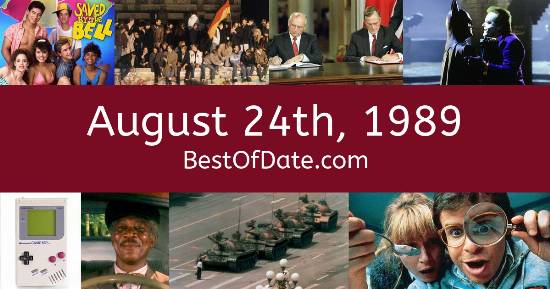 On August 24th, 1989, the following songs were at the top of the music charts in the USA and the UK.

The top "Box Office" movie on this date was the film "Parenthood".

The date is August 24th, 1989, and it's a Thursday. Anyone born today will have the star sign Virgo. The summer of 1989 is coming to an end and fall is just around the corner.

In America, the song Right Here Waiting by Richard Marx is on top of the singles charts. Over in the UK, Swing The Mood by Jive Bunny & Mastermixers is the number one hit song. George W. Bush Snr. is currently the President of the United States, and the movie Parenthood is at the top of the Box Office.

Nintendo has just released a handheld game console called the Game Boy. The Sega Genesis games console has just been released. Baseball player Pete Rose has just agreed to a lifetime ban following allegations that he gambled on games.

If you were to travel back to this day, notable figures such as Bette Davis, Sammy Davis, Jr, Stevie Ray Vaughan and Roald Dahl would all be still alive. On TV, people are watching popular shows such as "Knots Landing", "Magnum, P.I.", "Cheers" and "The Cosby Show". Meanwhile, gamers are playing titles such as "Missile Command", "Altered Beast", "Super Mario Bros. 3" and "Super Mario Land".

Children and teenagers are currently watching television shows such as "The Cosby Show", "Pingu", "ALF" and "Teenage Mutant Ninja Turtles". If you're a kid or a teenager, then you're probably playing with toys such as the Easy-Bake Oven, Transformers, Popples and Teenage Mutant Hero Turtles figures.

These are trending news stories and fads that were prevalent at this time. These are topics that would have been in the media on August 24th, 1989.

Check out our personality summary for people who were born on August 24th, 1989.

Television shows that people were watching in August, 1989.

Popular video games that people were playing in August of 1989.

If you are looking for some childhood nostalgia, then you should check out August 24th, 1995 instead.

Australian actress.
Born on August 24th, 1990
She was born exactly one year after this date.

George W. Bush Snr. was the President of the United States on August 24th, 1989.

Enter your date of birth below to find out how old you were on August 24th, 1989.
This information is not transmitted to our server.