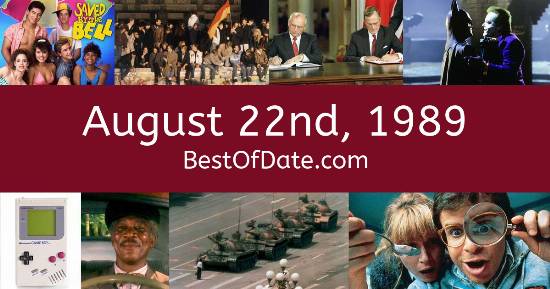 Songs that were on top of the music singles charts in the USA and the United Kingdom on August 22nd, 1989.

The date is August 22nd, 1989 and it's a Tuesday. Anyone born today will have the star sign Leo. The summer of 1989 is coming to an end and fall is just around the corner.

In America, the song Right Here Waiting by Richard Marx is on top of the singles charts. Over in the UK, Swing The Mood by Jive Bunny & Mastermixers is the number one hit song. George W. Bush Snr. is currently the President of the United States and the movie Parenthood is at the top of the Box Office.

Nintendo has just released a handheld game console called the Game Boy. The Sega Genesis games console has just been released. On TV, people are watching popular shows such as "'Allo 'Allo!", "Murder, She Wrote", "The Wonder Years" and "Quantum Leap".

Meanwhile, gamers are playing titles such as "Missile Command", "Maniac Mansion ", "Gain Ground" and "SimCity". Kids and teenagers are watching TV shows such as "Danger Mouse", "Adventures of the Little Koala", "Roseanne" and "Chip 'n' Dale's Rescue Rangers". If you're a kid or a teenager, then you're probably playing with toys such as Cabbage Patch Kids, Big wheel (tricycle), Sylvanian Families and Micro Machines.

Celebrities, historical figures and notable people who were born on the 22nd of August.

George W. Bush Snr. was the President of the United States on August 22nd, 1989.

Margaret Thatcher was the Prime Minister of the United Kingdom on August 22nd, 1989.

Enter your date of birth below to find out how old you were on August 22nd, 1989.

Leave a comment and tell everyone why August 22nd, 1989 is important to you.