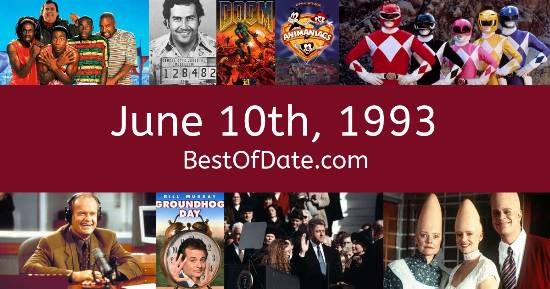 Songs that were on top of the music singles charts in the USA and the United Kingdom on June 10th, 1993.

The date is June 10th, 1993 and it's a Thursday. Anyone born today will have the star sign Gemini. It's summer, so the temperatures are warmer and the evenings are longer than usual.

In America, the song That's The Way Love Goes by Janet Jackson is on top of the singles charts. Over in the UK, All That She Wants by Ace of Base is the number one hit song. Bill Clinton is currently the President of the United States and the movie Cliffhanger is at the top of the Box Office.

It's 1993, so radio stations are being dominated by the likes of Meat Loaf, UB40, Snow, Haddaway, Whitney Houston, Take That, Janet Jackson and Mariah Carey. In celebrity news, singer Mariah Carey has married Sony Music CEO Tommy Mottola. Basketball fans are currently in shock at the news that New Jersey Nets shooting guard Dražen Petrović has recently died in a car accident in Germany. Petrović was only 28 years old.

In celebrity news, Prince has recently announced that he is changing his name to a symbol. As a result, the media is now referring to him as "the Artist Formerly Known as Prince". The song "I Get Around" has just been released by rapper Tupac Shakur. On TV, people are watching popular shows such as "Blossom", "Melrose Place", "X-Men" and "Star Trek: Deep Space Nine".

Meanwhile, gamers are playing titles such as "Street Fighter II: The World Warrior", "Super Mario Kart", "Sonic the Hedgehog 2" and "Syndicate". Children and teenagers are currently watching television shows such as "Teenage Mutant Ninja Turtles", "The Ren & Stimpy Show", "Rugrats" and "Taz-Mania". If you're a kid or a teenager, then you're probably playing with toys such as Transformers, Polly Pocket, G.I. Joe (figures) and Pogs.

If you are looking for some childhood nostalgia, then check out June 10th, 1999 instead.

Bill Clinton was the President of the United States on June 10th, 1993.

John Major was the Prime Minister of the United Kingdom on June 10th, 1993.