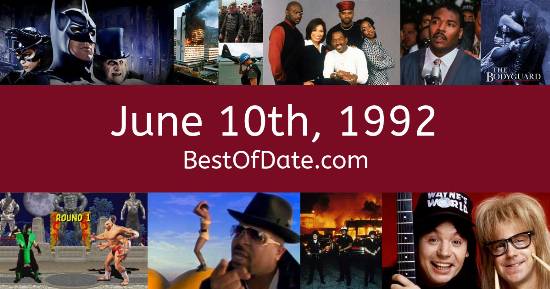 Songs that were on top of the music singles charts in the USA and the United Kingdom on June 10th, 1992.

The date is June 10th, 1992 and it's a Wednesday. Anyone born today will have the star sign Gemini. It's summer, so the temperatures are warmer and the evenings are longer than usual.

In America, the song Jump by Kriss Kross is on top of the singles charts. Over in the UK, ABBA-esque by Erasure is the number one hit song. George W. Bush Snr. is currently the President of the United States and the movie Lethal Weapon 3 is at the top of the Box Office.

In fashion, many of the trends from the late 80s are still in vogue. Colored tights, denim overalls, leotards, flannel shirts and shoulder pads are all fashionable at the moment. Grunge fashion has also become mainstream, popularizing band t-shirts, ripped jeans, mom jeans and Doc Martens. In Europe, a war is continuing to rage on in Bosnia and Herzegovina. Arkansas Governor Bill Clinton has become presidential nominee for the Democratic Party after winning the primary election in California. He will now will face off against Republican incumbent George H. W. Bush in this year's presidential election.

A new autobiography about Diana, Princess of Wales, is causing a stir. The book has revealed that Diana's marriage to Prince Charles nearly drove her to suicide and that the couple had affairs with other people. In Sweden, 1992 UEFA European Football Championship is currently taking place. On TV, people are watching popular shows such as "Last of the Summer Wine", "Married... with Children", "In the Heat of the Night" and "Seinfeld".

Meanwhile, gamers are playing titles such as "Duck Hunt", "Sonic the Hedgehog", "The Legend of Zelda: A Link to the Past" and "Civilization". Kids and teenagers are watching TV shows such as "Teenage Mutant Ninja Turtles", "The Simpsons", "Rugrats" and "Taz-Mania". If you're a kid or a teenager, then you're probably playing with toys such as Jenga, Super Soaker (water gun), Pogs and Nerf Blaster.

If you are looking for some childhood nostalgia, then check out June 10th, 1998 instead.

John Major was the Prime Minister of the United Kingdom on June 10th, 1992.