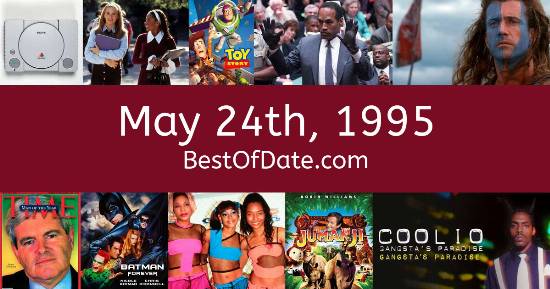 Songs that were on top of the music singles charts in the USA and the United Kingdom on May 24th, 1995:

The date is May 24th, 1995 and it's a Wednesday. Anyone born today will have the star sign Gemini. The summer of 1995 has finally arrived. The weather has warmed up and the evenings are brighter than usual.

In America, the song This Is How We Do It by Montell Jordan is on top of the singles charts. Over in the UK, Unchained Melody / The White Cliffs Of Dover by Robson Green & Jerome Flynn is the number one hit song. Bill Clinton is currently the President of the United States and the movie Die Hard 3 is at the top of the Box Office.

It's 1995, so radio stations are being dominated by the likes of Celine Dion, Everything but the Girl, Coolio, Oasis, Michael Jackson, Boyzone, Madonna, Montell Jordan, TLC and Mariah Carey. Former football player O.J. Simpson is currently being tried for the murder of his ex wife and her friend. On TV, people are watching popular shows such as "Teenage Mutant Ninja Turtles", "The Nanny", "Party of Five" and "Star Trek: Voyager".

Meanwhile, gamers are playing titles such as "Earthworm Jim", "Donkey Kong Country", "Warcraft: Orcs & Humans" and "Mortal Kombat 3". Kids and teenagers are watching TV shows such as "Beverly Hills, 90210", "Doug", "Living Single" and "Bill Nye the Science Guy". If you're a kid or a teenager, then you're probably playing with toys such as "Easy-Bake Oven", "Nerf Blaster", "Mighty Max" and "Sky Dancers".

Notable events that occurred around May 24th, 1995:

Celebrities, historical figures and noteable people who were born on the 24th of May:

Who was the Prime Minister of the United Kingdom on May 24th, 1995?

Looking for some nostalgia? Here are some Youtube videos relating to May 24th, 1995. Please note that videos are automatically selected by Youtube and that results may vary! Click on the "Load Next Video" button to view the next video in the search playlist. In many cases, you'll find episodes of old TV shows, documentaries, music videos and soap dramas.