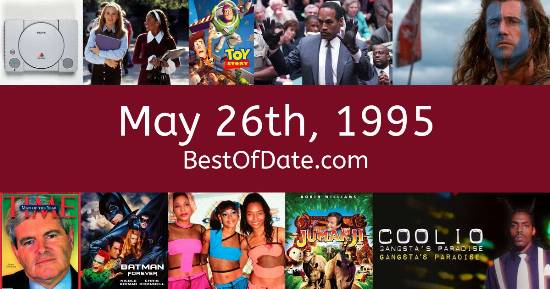 Songs that were on top of the music singles charts in the USA and the United Kingdom on May 26th, 1995.

The date is May 26th, 1995 and it's a Friday. Anyone born today will have the star sign Gemini. Currently, people have "that Friday feeling" and are looking forward to the weekend.

Former football player O.J. Simpson is currently being tried for the murder of his ex wife and her friend. On TV, people are watching popular shows such as "Boy Meets World", "Walker, Texas Ranger", "Friends" and "Father Ted". Meanwhile, gamers are playing titles such as "Earthworm Jim", "Donkey Kong Country", "Warcraft: Orcs & Humans" and "Mortal Kombat 3".

Kids and teenagers are watching TV shows such as "Teenage Mutant Ninja Turtles", "Home Improvement", "Weird Science" and "The Magic School Bus". Popular toys at the moment include the likes of Yo-yo, Pogs, Littlest Pet Shop and Mighty Max.

Notable events that occurred around May 26th, 1995.

Historical weather information for May 26th, 1995.

Bill Clinton was the President of the United States on May 26th, 1995.

John Major was the Prime Minister of the United Kingdom on May 26th, 1995.