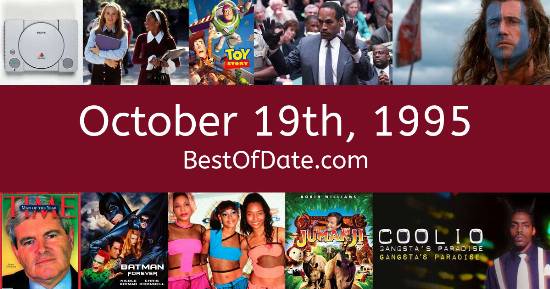 Songs that were on top of the music singles charts in the USA and the United Kingdom on October 19th, 1995.

The date is October 19th, 1995 and it's a Thursday. Anyone born today will have the star sign Libra. The summer is long gone. Temperatures have started to become much cooler and the evenings are beginning to get darker.

Bill Clinton is currently the President of the United States and the movie Seven is at the top of the Box Office. In the United Kingdom, John Major is the current Prime Minister. A new form of communication called "text messaging" is continuing to grow in popularity. However, it can only be done if both the sender and the receiver are on the same cell network.

If you were to travel back to this day, notable figures such as Yitzhak Rabin, Stretch, Roxie Roker and Dean Martin would all be still alive. On TV, people are watching popular shows such as "Murder, She Wrote", "Dr. Quinn, Medicine Woman", "The X-Files" and "ER". Meanwhile, gamers are playing titles such as "Donkey Kong Country", "Mortal Kombat 3", "Full Throttle" and "Air Combat".

Kids and teenagers are watching TV shows such as "The Animals of Farthing Wood", "Bill Nye the Science Guy", "Weird Science" and "All That". Popular toys at the moment include the likes of Polly Pocket, Lego Pirates, G.I. Joe (figures) and Littlest Pet Shop.

If you are looking for some childhood nostalgia, then check out October 19th, 2001 instead.

Bill Clinton was the President of the United States on October 19th, 1995.

John Major was the Prime Minister of the United Kingdom on October 19th, 1995.

Enter your date of birth below to find out how old you were on October 19th, 1995.

Here are some fun statistics about October 19th, 1995.