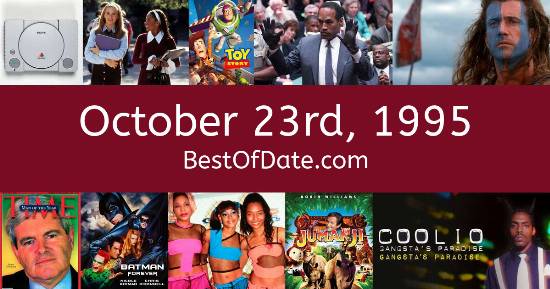 On October 23rd, 1995, the following songs were at the top of the music charts in the USA and the UK.

The date is October 23rd, 1995, and it's a Monday. Anyone born today will have the star sign Scorpio. The summer is long gone. Temperatures have started to become much cooler and the evenings are beginning to get darker.

Fallen leaves have carpeted driveways, lawns, pathways and sidewalks and there's a fresh earthy scent in the ear. Halloween of 1995 is quickly approaching and stores are selling costumes and decorations. In America, the song Fantasy by Mariah Carey is on top of the singles charts.

In Europe, a war is continuing to rage on in Bosnia and Herzegovina. NATO, which intervened in August, is currently carrying out a sustained air campaign against Serbian forces. If you were to travel back to this day, notable figures such as Yitzhak Rabin, Stretch, Roxie Roker and Dean Martin would all be still alive. On TV, people are watching popular shows such as "Matlock", "Dr. Quinn, Medicine Woman", "The X-Files" and "The Nanny".

Meanwhile, gamers are playing titles such as "Myst", "Wario's Woods", "Rayman" and "Destruction Derby". Children and teenagers are currently watching television shows such as "The Adventures of Pete & Pete", "Tales from the Cryptkeeper", "The Nanny" and "Sister, Sister". Popular toys at the moment include the likes of the Easy-Bake Oven, Lego Pirates, Super Soaker (water gun) and Action Man.

These are trending news stories and fads that were prevalent at this time. These are topics that would have been in the media on October 23rd, 1995.

News stories and other events that happened around October 23rd, 1995.

Check out our personality summary for people who were born on October 23rd, 1995.

If you are looking for some childhood nostalgia, then you should check out October 23rd, 2001 instead.

Actress.
Born on October 23rd, 1998
She was born exactly 3 years after this date.

Bill Clinton was the President of the United States on October 23rd, 1995.

Find out what your age was on October 23rd, 1995, by entering your DOB below.
This information is not saved on our server.

Here are some fun statistics about October 23rd, 1995.