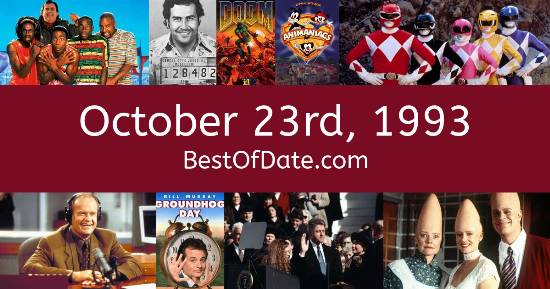 On October 23rd, 1993, the following songs were at the top of the music charts in the USA and the UK.

The date is October 23rd, 1993, and it's a Saturday. Anyone born today will have the star sign Scorpio. Currently, people are enjoying their weekend.

The summer is long gone. Temperatures have started to become much cooler and the evenings are beginning to get darker. Fallen leaves have carpeted driveways, lawns, pathways and sidewalks and there's a fresh earthy scent in the ear. Halloween of 1993 is quickly approaching and stores are selling costumes and decorations.

In America, the song Dream Lover by Mariah Carey is on top of the singles charts. Over in the UK, Relight My Fire by Take That & Lulu is the number one hit song. Bill Clinton is currently the President of the United States, and the movie The Beverly Hillbillies is at the top of the Box Office.

It's 1993, so radio stations are being dominated by the likes of Meat Loaf, UB40, Snow, Haddaway, Whitney Houston, Take That, Janet Jackson and Mariah Carey. In music news, singer Mariah Carey has released her new single "Hero". In baseball, the Toronto Blue Jays have just won the 1993 World Series for the second time in two years after defeating the Philadelphia Phillies by four games to two.

If you were to travel back to this day, notable figures such as Vincent Price, River Phoenix, Frank Zappa and Bill Hicks would all be still alive. On TV, people are watching popular shows such as "Dr. Quinn, Medicine Woman", "Star Trek: Deep Space Nine", "Lois & Clark: The New Adventures of Superman" and "Frasier". Meanwhile, gamers are playing titles such as "Final Fantasy V", "Tiny Toon Adventures 2: Trouble in Wackyland", "Mighty Final Fight" and "Gunstar Heroes".

Children and teenagers are currently watching television shows such as "Full House", "Rugrats", "Mighty Morphin Power Rangers" and "Boy Meets World". If you're a kid or a teenager, then you're probably playing with toys such as Micro Machines, Jenga, the Game Boy and Power Rangers figures.

These are trending news stories and fads that were prevalent at this time. These are topics that would have been in the media on October 23rd, 1993.

News stories, pop culture trends, and other events that happened around October 23rd, 1993.

Check out our personality summary for people who were born on October 23rd, 1993.

If you are looking for some childhood nostalgia, then you should check out October 23rd, 1999, instead.

Celebrities, historical figures, and other notable people who were born on October 23rd.

Actress.
Born on October 23rd, 1998
She was born exactly 5 years after this date.

Bill Clinton was the President of the United States on October 23rd, 1993.

Find out what your age was on October 23rd, 1993, by entering your DOB below.
This information is not saved on our server.

Here are some fun statistics about October 23rd, 1993.