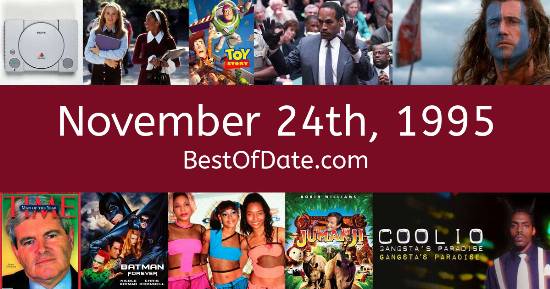 On November 24th, 1995, the following songs were at the top of the music charts in the USA and the UK.

The date is November 24th, 1995, and it's a Friday. Anyone born today will have the star sign Sagittarius. Currently, people have "that Friday feeling" and are looking forward to the weekend.

It is Black Friday in the United States - a day that many consider to be the start of the Christmas shopping season. It's November, so the evenings are getting darker and the days are getting colder. In America, the song Exhale by Whitney Houston is on top of the singles charts.

Over in the UK, I Believe / Up On The Roof by Robson & Jerome is the number one hit song. Bill Clinton is currently the President of the United States, and the movie GoldenEye is at the top of the Box Office. In the United Kingdom, John Major is the current Prime Minister.

Meanwhile, CDs have become the dominant format for music. People are buying CD players and portable CD players such as the "Discman". As a result, the older cassette tape format is continuing to decline in sales. It's 1995, so radio stations are being dominated by the likes of Celine Dion, Everything but the Girl, Coolio, Oasis, Michael Jackson, Boyzone, Madonna, Montell Jordan, TLC and Mariah Carey. In Europe, a war is continuing to rage on in Bosnia and Herzegovina. NATO, which intervened in August, is currently carrying out a sustained air campaign against Serbian forces.

If you were to travel back to this day, notable figures such as Stretch, Roxie Roker, Dean Martin and Agnieszka Kotlarska would all be still alive. On TV, people are watching popular shows such as "Dr. Quinn, Medicine Woman", "Lois & Clark: The New Adventures of Superman", "The Nanny" and "Ellen". Meanwhile, gamers are playing titles such as "RoboCop Versus The Terminator", "Full Throttle", "Judge Dredd" and "Super Mario World 2: Yoshi's Island".

Kids and teenagers are watching TV shows such as "The Fresh Prince of Bel-Air", "Hangin' with Mr. Cooper", "Pinky and the Brain" and "Little Bear". If you're a kid or a teenager, then you're probably playing with toys such as Screwball Scramble, Micro Machines, Nerf Blaster and Littlest Pet Shop.

These are trending news stories and fads that were prevalent at this time. These are topics that would have been in the media on November 24th, 1995.

Check out our personality summary for people who were born on November 24th, 1995.

If you are looking for some childhood nostalgia, then you should check out November 24th, 2001 instead.

Bill Clinton was the President of the United States on November 24th, 1995.

Enter your date of birth below to find out how old you were on November 24th, 1995.
This information is not transmitted to our server.

Here are some fun statistics about November 24th, 1995.