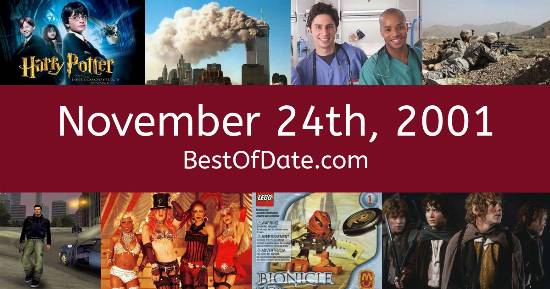 On November 24th, 2001, the following songs were at the top of the music charts in the USA and the UK.

The top "Box Office" movie on this date was the film "Monsters, Inc.".

The date is November 24th, 2001, and it's a Saturday. Anyone born today will have the star sign Sagittarius. Currently, people are enjoying their weekend.

In America, Thanksgiven Day and Black Friday have recently come and passed. People are now beginning to look forward to Christmas. It's November, so the evenings are getting darker and the days are getting colder. In America, the song Family Affair by Mary J. Blige is on top of the singles charts.

Over in the UK, If You Come Back by Blue is the number one hit song. George W. Bush Jnr. is currently the President of the United States, and the movie Monsters, Inc. is at the top of the Box Office. In the United Kingdom, Tony Blair is the current Prime Minister.

It's 2001, so the music charts are being dominated by the likes of Christina Aguilera, Janet Jackson, OutKast, Crazy Town, Destiny's Child, Usher, Alicia Keys, Blu Cantrell and Jennifer Lopez. The US invasion of Afghanistan is occurring. If you were to travel back to this day, notable figures such as George Harrison, Left Eye, The British Bulldog and John Gotti would all be still alive.

Popular toys at the moment include the likes of Gogo's Crazy Bones, Groovy Girls, HitClips audio player and the Game Boy Advance.

These are trending news stories and fads that were prevalent at this time. These are topics that would have been in the media on November 24th, 2001.

Check out our personality summary for people who were born on November 24th, 2001.

Television shows that people were watching in November, 2001.

Popular video games that people were playing in November of 2001.

If you are looking for some childhood nostalgia, then you should check out November 24th, 2007 instead.

George W. Bush Jnr. was the President of the United States on November 24th, 2001.

Enter your date of birth below to find out how old you were on November 24th, 2001.
This information is not transmitted to our server.

Here are some fun statistics about November 24th, 2001.