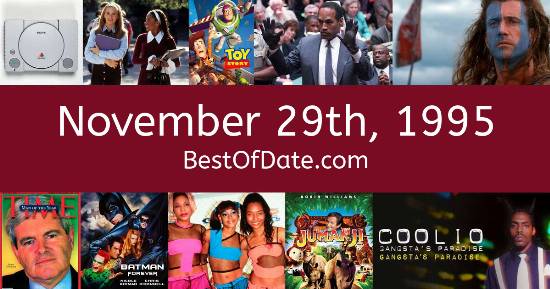 Songs that were on top of the music singles charts in the USA and the United Kingdom on November 29th, 1995:

The date is November 29th, 1995 and it's a Wednesday. Anyone born today will have the star sign Sagittarius. It's November, so the evenings are getting darker and the days are getting colder.

In America, the song One Sweet Day by Mariah Carey & Boyz II Men is on top of the singles charts. Over in the UK, I Believe / Up On The Roof by Robson & Jerome is the number one hit song. Bill Clinton is currently the President of the United States and the movie GoldenEye is at the top of the Box Office.

In the United Kingdom, John Major is the current Prime Minister. In fashion, "grunge" clothing has declined in popularity and women are beginning to wear form-fitting outfits such as slip dresses and pencil skirts. Movies such as Clueless and The Craft have popularized the "sexy school girl" look. It's 1995, so radio stations are being dominated by the likes of Celine Dion, Everything but the Girl, Coolio, Oasis, Michael Jackson, Boyzone, Madonna, Montell Jordan, TLC and Mariah Carey.

In Europe, a war is continuing to rage on in Bosnia and Herzegovina. NATO, which intervened in August, is currently carrying out a sustained air campaign against Serbian forces. On TV, people are watching popular shows such as "Murder, She Wrote", "Beverly Hills, 90210", "Party of Five" and "Star Trek: Voyager". Meanwhile, gamers are playing titles such as "Full Throttle", "Rayman", "Destruction Derby" and "Phantasmagoria".

Children and teenagers are currently watching television shows such as "Tales from the Cryptkeeper", "All That", "The Secret World of Alex Mack" and "Hang Time". Popular toys include the likes of "Easy-Bake Oven", "Polly Pocket", "Pogs" and "Sky Dancers".

Celebrities, historical figures and noteable people who were born on the 29th of November:

Who was the Prime Minister of the United Kingdom on November 29th, 1995?

Enter your date of birth below to find out how old you were on November 29th, 1995.

Looking for some nostalgia? Here are some Youtube videos relating to November 29th, 1995. Please note that videos are automatically selected by Youtube and that results may vary! Click on the "Load Next Video" button to view the next video in the search playlist. In many cases, you'll find episodes of old TV shows, documentaries, music videos and soap dramas.

Here are some fun statistics about November 29th, 1995.