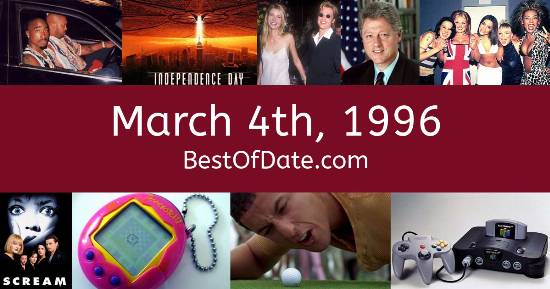 Songs that were on top of the music singles charts in the USA and the United Kingdom on March 4th, 1996.

The date is March 4th, 1996 and it's a Monday. Anyone born today will have the star sign Pisces. Spring has started to creep in and the days are beginning to get longer.

In America, the song One Sweet Day by Mariah Carey & Boyz II Men is on top of the singles charts. Over in the UK, How Deep Is Your Love by Take That is the number one hit song. Bill Clinton is currently the President of the United States and the movie Up Close and Personal is at the top of the Box Office.

If you were to travel back to this day, notable figures such as Agnieszka Kotlarska, Tupac Shakur, Yaki Kadafi and Tiny Tim would all be still alive. On TV, people are watching popular shows such as "Married... with Children", "The Secret World of Alex Mack", "Father Ted" and "JAG". Meanwhile, gamers are playing titles such as "Mortal Kombat 3", "Air Combat", "Destruction Derby" and "Twisted Metal".

Children and teenagers are currently watching television shows such as "Married... with Children", "All That", "The Magic School Bus" and "In the House". If you're a kid or a teenager, then you're probably playing with toys such as Sylvanian Families, Polly Pocket, G.I. Joe (figures) and 12" talking Buzz Lightyear Action Figure.

If you are looking for some childhood nostalgia, then check out March 4th, 2002 instead.

Bill Clinton was the President of the United States on March 4th, 1996.

John Major was the Prime Minister of the United Kingdom on March 4th, 1996.

Enter your date of birth below to find out how old you were on March 4th, 1996.

Here are some fun statistics about March 4th, 1996.