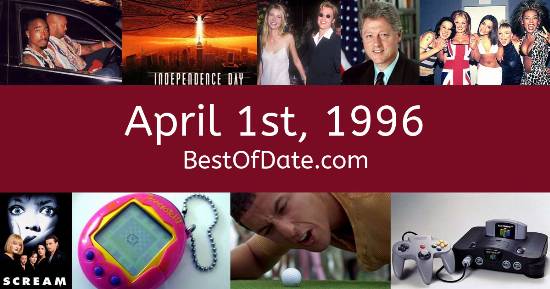 Songs that were on top of the music singles charts in the USA and the United Kingdom on April 1st, 1996.

The date is April 1st, 1996 and it's a Monday. Anyone born today will have the star sign Aries. It is April Fool's Day, which means that people are playing practical jokes on one another.

The summer of 1996 is drawing closer and temperatures have started to rise. In America, the song Because You Loved Me by Celine Dion is on top of the singles charts. Over in the UK, Firestarter by Prodigy is the number one hit song.

Bill Clinton is currently the President of the United States and the movie Birdcage is at the top of the Box Office. In the United Kingdom, John Major is the current Prime Minister. A new form of communication called "text messaging" is continuing to grow in popularity. However, it can only be done if both the sender and the receiver are on the same cell network.

It's 1996, so radio stations are being dominated by the likes of Mariah Carey, Boyz II Men, Céline Dion, Oasis, Mark Morrison, Spice Girls, Los Del Rio, 2Pac and Coolio. If you were to travel back to this day, notable figures such as Agnieszka Kotlarska, Tupac Shakur, Yaki Kadafi and Tiny Tim would all be still alive. On TV, people are watching popular shows such as "Matlock", "Step by Step", "ER" and "Xena: Warrior Princess".

Meanwhile, gamers are playing titles such as "Theme Park", "Killer Instinct", "Virtua Fighter 2" and "Duke Nukem 3D". Children and teenagers are currently watching television shows such as "Round the Twist", "Are You Afraid of the Dark?", "Dexter's Laboratory" and "Pinky and the Brain". If you're a kid or a teenager, then you're probably playing with toys such as Yo-yo, the SEGA Game Gear, Sky Dancers and Styrofoam plane gliders.

If you are looking for some childhood nostalgia, then check out April 1st, 2002 instead.

Bill Clinton was the President of the United States on April 1st, 1996.

John Major was the Prime Minister of the United Kingdom on April 1st, 1996.

Enter your date of birth below to find out how old you were on April 1st, 1996.

Here are some fun statistics about April 1st, 1996.