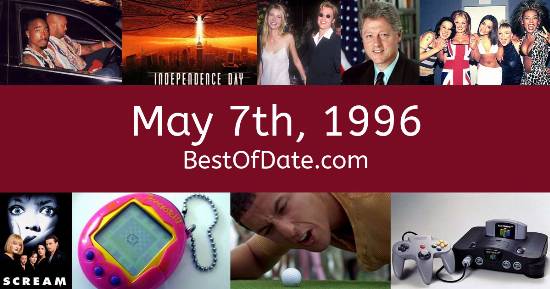 Songs that were on top of the music singles charts in the USA and the United Kingdom on May 7th, 1996:

The date is May 7th, 1996 and it's a Tuesday. Anyone born today will have the star sign Taurus. The summer of 1996 has finally arrived. The weather has warmed up and the evenings are brighter than usual.

In America, the song Always Be My Baby by Mariah Carey is on top of the singles charts. Over in the UK, Fastlove by George Michael is the number one hit song. Bill Clinton is currently the President of the United States and the movie The Craft is at the top of the Box Office.

Everyone and their grandmother is buying a new "virtual pet" called the Tamagotchi. The movie Barb Wire, starring Pamela Anderson, is currently being shown in movie theaters. On TV, people are watching popular shows such as "Only Fools and Horses", "Melrose Place", "Dr. Quinn, Medicine Woman" and "The Secret World of Alex Mack".

Meanwhile, gamers are playing titles such as "Air Combat", "Command & Conquer", "Rayman" and "Duke Nukem 3D". Kids and teenagers are watching TV shows such as "The Simpsons", "The Nanny", "Gargoyles" and "Aaahh!!! Real Monsters". If you're a kid or a teenager, then you're probably playing with toys such as "G.I. Joe (figures)", "Super Soaker (water gun)", "PlayStation (PS1)" and "Tamagotchi".

Notable events that occurred around May 7th, 1996:

Who was the Prime Minister of the United Kingdom on May 7th, 1996?

Enter your date of birth below to find out how old you were on May 7th, 1996.

Looking for some nostalgia? Here are some Youtube videos relating to May 7th, 1996. Please note that videos are automatically selected by Youtube and that results may vary! Click on the "Load Next Video" button to view the next video in the search playlist. In many cases, you'll find episodes of old TV shows, documentaries, music videos and soap dramas.