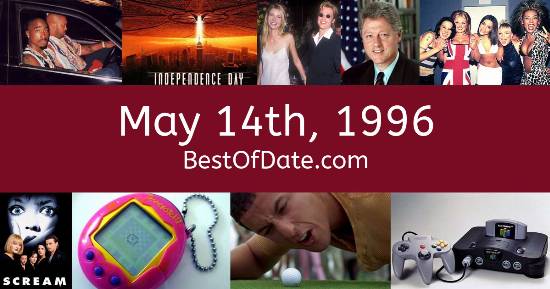 Songs that were on top of the music singles charts in the USA and the United Kingdom on May 14th, 1996.

The date is May 14th, 1996 and it's a Tuesday. Anyone born today will have the star sign Taurus. The summer of 1996 has finally arrived. The weather has warmed up and the evenings are brighter than usual.

In America, the song Tha Crossroads by Bone Thugs-N-Harmony is on top of the singles charts. Over in the UK, Fastlove by George Michael is the number one hit song. Bill Clinton is currently the President of the United States and the movie The Craft is at the top of the Box Office.

Everyone and their grandmother is buying a new "virtual pet" called the Tamagotchi. The movie Barb Wire, starring Pamela Anderson, is currently being shown in movie theaters. If you were to travel back to this day, notable figures such as Agnieszka Kotlarska, Tupac Shakur, Yaki Kadafi and Tiny Tim would all be still alive.

If you're a kid or a teenager, then you're probably playing with toys such as Polly Pocket, G.I. Joe (figures), Action Man and Sky Dancers.

Notable events that occurred around May 14th, 1996.

If you are looking for some childhood nostalgia, then check out May 14th, 2002 instead.

Historical weather information for May 14th, 1996.

Bill Clinton was the President of the United States on May 14th, 1996.

John Major was the Prime Minister of the United Kingdom on May 14th, 1996.