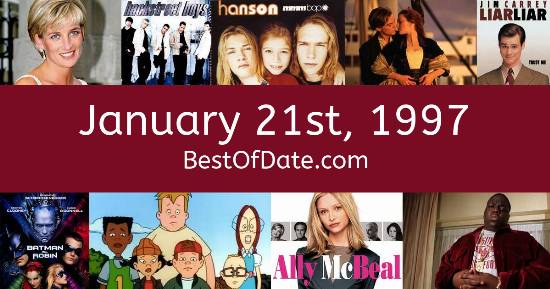 Songs that were on top of the music singles charts in the USA and the United Kingdom on January 21st, 1997.

The movie "Beverly Hills Ninja" was at the top of the box office on January 21st, 1997.

The date is January 21st, 1997 and it's a Tuesday. Anyone born today will have the star sign Aquarius. In America, the song Un-break My Heart by Toni Braxton is on top of the singles charts.

Over in the UK, Your Woman by White Town is the number one hit song. Bill Clinton is currently the President of the United States and the movie Beverly Hills Ninja is at the top of the Box Office. In the United Kingdom, John Major is the current Prime Minister.

A new form of communication called "text messaging" is continuing to grow in popularity. However, it can only be done if both the sender and the receiver are on the same cell network. Meanwhile, a global system called "the Internet" is also starting to take off. Each day, more and more people are learning how to send emails and browse "websites" on the World Wide Web by connecting their IBM computers to noisy dial-up modems. Meanwhile, CDs have become the dominant format for music. People are buying CD players and the portable CD players such as the "Discman". As a result, the older cassette tape format is continuing to decline in sales.

In fashion, bright and metallic colors are all the rage. A contrast with the darker "grunge" colors that were popular at the beginning of the 1990s. Women are wearing maxi skirts, bell bottoms, knee boots, crop tops, tube tops, slip dresses, maxi coats and platform shoes. Meanwhile, a lot of men have ditched their grunge and skater clothes in favor of sporting a more "dressy casual" look. Shorter hair on men is also becoming more popular. It's 1997, so radio stations are being dominated by the likes of Toni Braxton, the Spice Girls, Puff Daddy, No Doubt, Hanson and Elton John. If you were to travel back to this day, notable figures such as The Notorious B.I.G, Gianni Versace, Princess Diana and Mother Teresa would all be still alive.

On TV, people are watching popular shows such as "Roseanne", "Mad About You", "Hercules: The Legendary Journeys" and "3rd Rock from the Sun". Meanwhile, gamers are playing titles such as "Duke Nukem 3D", "Quake", "Crash Bandicoot" and "Command & Conquer: Red Alert". Children and teenagers are currently watching television shows such as "X-Men: The Animated Series", "Living Single", "Little Bear" and "Clueless".

Popular toys at the moment include the likes of Polly Pocket, Lego Pirates, G.I. Joe (figures) and the PlayStation (PS1).

If you are looking for some childhood nostalgia, then check out January 21st, 2003 instead.

Bill Clinton was the President of the United States on January 21st, 1997.

John Major was the Prime Minister of the United Kingdom on January 21st, 1997.

Enter your date of birth below to find out how old you were on January 21st, 1997.

Here are some fun statistics about January 21st, 1997.