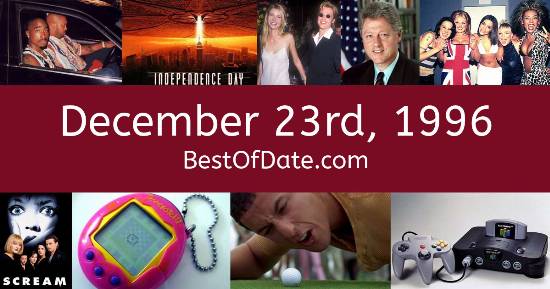 Songs that were on top of the music singles charts in the USA and the United Kingdom on December 23rd, 1996.

The movie "Beavis and Butt-Head Do America" was at the top of the box office on December 23rd, 1996.

The date is December 23rd, 1996 and it's a Monday. Anyone born today will have the star sign Capricorn. Christmas Day of 1996 is fast approaching and the excitement is building. Department stores are thronged with Christmas shoppers.

In America, the song Un-break My Heart by Toni Braxton is on top of the singles charts. Over in the UK, 2 Become 1 by Spice Girls is the number one hit song. Bill Clinton is currently the President of the United States and the movie Beavis and Butt-Head Do America is at the top of the Box Office.

A new dance craze called the "Macarena" is all the rage at the moment. A new video game console called the "Nintendo 64" has just been released. It is currently competing against the Sony PlayStation and the Sega Saturn. If you were to travel back to this day, notable figures such as JonBenét Ramsey, The Notorious B.I.G, Gianni Versace and Princess Diana would all be still alive.

On TV, people are watching popular shows such as "Last of the Summer Wine", "Hangin' with Mr. Cooper", "Star Trek: Deep Space Nine" and "Sabrina, the Teenage Witch". Meanwhile, gamers are playing titles such as "Phantasmagoria", "Quake", "Super Mario 64" and "Wipeout 2097". Children and teenagers are currently watching television shows such as "Roseanne", "Sweet Valley High", "Gargoyles" and "Sabrina the Teenage Witch".

If you're a kid or a teenager, then you're probably playing with toys such as Yo-yo, Sky Dancers, Tickle Me Elmo and the Nintendo 64.

If you are looking for some childhood nostalgia, then check out December 23rd, 2002 instead.

Bill Clinton was the President of the United States on December 23rd, 1996.

John Major was the Prime Minister of the United Kingdom on December 23rd, 1996.

Enter your date of birth below to find out how old you were on December 23rd, 1996.

Here are some fun statistics about December 23rd, 1996.