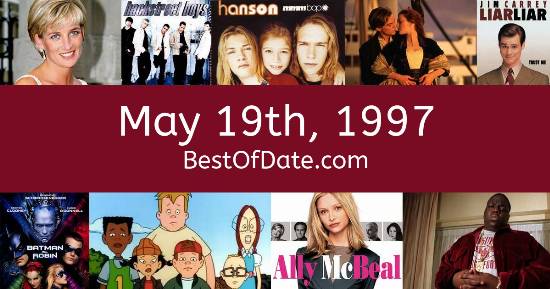 These songs were on top of the music charts in the United States and the United Kingdom on May 19th, 1997.

The movie "Fifth Element" was at the top of the Box Office on this day.

The date is May 19th, 1997, and it's a Monday. Anyone born today will have the star sign Taurus. The summer of 1997 has finally arrived. The weather has warmed up and the evenings are brighter than usual.

In America, the song Mmmbop by Hanson is on top of the singles charts. Over in the UK, You're Not Alone by Olive is the number one hit song. Bill Clinton is currently the President of the United States, and the movie Fifth Element is at the top of the Box Office.

If you were to travel back to this day, notable figures such as Gianni Versace, Princess Diana, Mother Teresa and John Denver would all be still alive. On TV, people are watching popular shows such as "Star Trek: Voyager", "Father Ted", "3rd Rock from the Sun" and "King of the Hill". Meanwhile, gamers are playing titles such as "Tomb Raider", "Diablo", "Final Fantasy VII" and "Castlevania: Symphony of the Night".

Children and teenagers are currently watching television shows such as "Beverly Hills, 90210", "Sister, Sister", "Aaahh!!! Real Monsters" and "Sabrina the Teenage Witch". If you're a kid or a teenager, then you're probably playing with toys such as Jenga, the Sega Saturn, Tickle Me Elmo and Bop It.

These are trending news stories and fads that were prevalent at this time. These are topics that would have been in the media on May 19th, 1997.

News stories, pop culture trends, and other events that happened around May 19th, 1997.

Check out our personality summary for people who were born on May 19th, 1997.

If you are looking for some childhood nostalgia, then you should check out May 19th, 2003, instead.

Celebrities, historical figures, and other notable people who were born on May 19th.

Historical weather information for May 19th, 1997.

Bill Clinton was the President of the United States on May 19th, 1997.

Find out what your age was on May 19th, 1997, by entering your DOB below.
This information is not saved on our server.