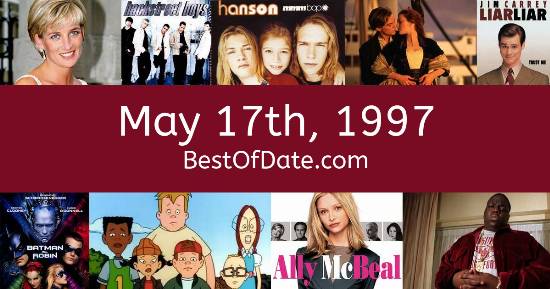 These songs were on top of the music charts in the United States and the United Kingdom on May 17th, 1997.

The movie "Fifth Element" was at the top of the Box Office on this day.

The following comments about May 17th, 1997 were written by our visitors.

I was a young kid when Cantona announced his retirement. We were coming back from the beach when it came on the radio. At the time, I thought United were going to start losing without him. Little did I know lol.
Posted on May 17th, 2022 10:26

Di Matteo scored for Chelsea in the first minute. As a Chelsea fan, it was weird seeing us win something "big" for once. I think we had finished mid-table the season before!
Posted on December 1st, 2021 20:29

The date is May 17th, 1997, and it's a Saturday. Anyone born today will have the star sign Taurus. Currently, people are enjoying their weekend.

The summer of 1997 has finally arrived. The weather has warmed up and the evenings are brighter than usual. In America, the song Hypnotize by Notorious B.I.G. is on top of the singles charts. Over in the UK, You're Not Alone by Olive is the number one hit song.

Bill Clinton is currently the President of the United States, and the movie Fifth Element is at the top of the Box Office. In the United Kingdom, Tony Blair is the current Prime Minister. A new form of communication called "text messaging" is continuing to grow in popularity. However, it can only be done if both the sender and the receiver are on the same cell network.

It's 1997, so radio stations are being dominated by the likes of Toni Braxton, the Spice Girls, Puff Daddy, No Doubt, Hanson and Elton John. If you were to travel back to this day, notable figures such as Gianni Versace, Princess Diana, Mother Teresa and John Denver would all be still alive. On TV, people are watching popular shows such as "Roseanne", "Star Trek: Deep Space Nine", "Party of Five" and "Touched by an Angel".

Meanwhile, gamers are playing titles such as "Wipeout 2097", "Soul Blade", "Turok: Dinosaur Hunter" and "Theme Hospital". Kids and teenagers are watching TV shows such as "Married... with Children", "Rugrats", "Animaniacs" and "7th Heaven". If you're a kid or a teenager, then you're probably playing with toys such as Jenga, Littlest Pet Shop, the PlayStation (PS1) and Bop It.

These are trending news stories and fads that were prevalent at this time. These are topics that would have been in the media on May 17th, 1997.

News stories and other events that happened around May 17th, 1997.

Check out our personality summary for people who were born on May 17th, 1997.

If you are looking for some childhood nostalgia, then you should check out May 17th, 2003 instead.

Historical weather information for May 17th, 1997.

Bill Clinton was the President of the United States on May 17th, 1997.

Tony Blair was the Prime Minister of the United Kingdom on May 17th, 1997.

Find out what your age was on May 17th, 1997, by entering your DOB below.
This information is not saved on our server.