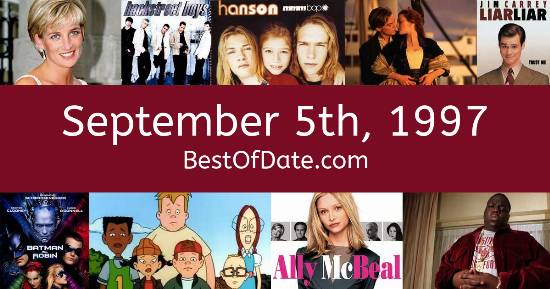 Events that occurred on September 5th, 1997:

Songs that were on top of the music singles charts in the USA and the United Kingdom on September 5th, 1997:

The date is September 5th, 1997 and it's a Friday. Anyone born today will have the star sign Virgo. Currently, people have "that Friday feeling" and are looking forward to the weekend.

Schools have started back and autumn has arrived, so temperatures have started to cool and trees are beginning to shed their leaves. In America, the song Mo Money Mo Problems by Notorious B.I.G. is on top of the singles charts. Over in the UK, Men In Black by Will Smith is the number one hit song.

Bill Clinton is currently the President of the United States and the movie Fire Down Below is at the top of the Box Office. In the United Kingdom, Tony Blair is the current Prime Minister. In fashion, bright and metallic colors are all the rage. A contrast with the darker "grunge" colors that were popular at the beginning of the 1990s. Women are wearing maxi skirts, bell bottoms, knee boots, crop tops, tube tops, slip dresses, maxi coats and platform shoes. Meanwhile, a lot of men have ditched their grunge and skater clothes in favor of sporting a more "dressy casual" look. Shorter hair on men is also becoming more popular.

It's 1997, so radio stations are being dominated by the likes of Toni Braxton, the Spice Girls, Puff Daddy, No Doubt, Hanson and Elton John. The United Kingdom is in mourning after Princess Diana dies in a car crash. People are watching popular TV shows such as "The Nanny", "Beyond Belief: Fact or Fiction", "Oz" and "Recess".

Meanwhile, gamers are playing titles such as "The Elder Scrolls II: Daggerfall", "Blood Omen: Legacy of Kain", "Theme Hospital" and "GoldenEye 007". Children and teenagers are currently watching television shows such as "Beverly Hills, 90210", "Rugrats", "Smart Guy" and "USA High". If you're a kid or a teenager, then you're probably playing with toys such as "Polly Pocket", "Littlest Pet Shop", "PlayStation (PS1)" and "The Pokémon Trading Card Game".

Who was the Prime Minister of the United Kingdom on September 5th, 1997?

Enter your date of birth below to find out how old you were on September 5th, 1997.

Looking for some nostalgia? Here are some Youtube videos relating to September 5th, 1997. Please note that videos are automatically selected by Youtube and that results may vary! Click on the "Load Next Video" button to view the next video in the search playlist. In many cases, you'll find episodes of old TV shows, documentaries, music videos and soap dramas.

Here are some fun statistics about September 5th, 1997.